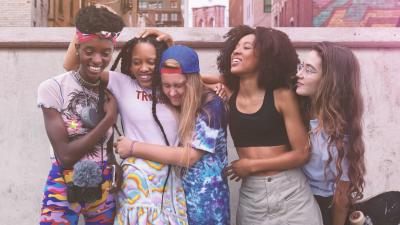 Atelevision series based on a movie is no new thing. Shows like Westworld and Fargo have found success mining themes and playing in a world created previously. It's far less often that we see something helmed by the original creator, and even rarer when it's carried out by the same actors. Betty, the new HBO series, is just that. Led by showrunner Crystal Moselle, it's based on her 2018 production Skate Kitchen, a well-received yet relatively unknown film. One of the most intriguing aspects of the show is that it sees the five principle characters reprise their roles (perhaps sharing the most DNA with Clerks: The Animated Series). It makes sense though, as the cast are real-life skateboarders essentially playing heightened versions of themselves.

If you never saw Skate Kitchen, fear not. In many ways, aside from its name, Betty (an iffy term in surf and skate culture referencing a young woman) actually exceeds its source material. And there's no Jaden Smith!

The show centers around five young female skateboarders in New York City, as they make their way through a male-dominated subculture. There's Janay (Dede Lovelace), the emotional anchor of the show, Camille (Rachel Vinberg), the group's new friend trying to balance out her male and female friendships, the taciturn documentarian Honeybear (Kabrina Adams), the charming rich-girl drug dealer Indigo (Ajani Russell), and the heady and lovable wildcard Kirt (Nina Moran). While Skate Kitchen almost totally centers around Camille, Betty gives each character their time to shine, with Janay arguably taking center stage. Each character is unique and well fleshed-out, to one of the series strongest credits.

Capturing Moselle's ethereal, almost mumblecore sensibilities is done with a deft hand. It's relatively faster-paced with a denser narrative than the original film, and brings aboard behind the scenes talents like Leslie Arfin and Moshe Kasher (and the soundtrack doesn't hurt either). Betty is punchy and quick-witted while at the same time floating in an urban bokeh of navel-gazing indie style.

Though it starts off shaky, it quickly finds its footing. Having such richly identifiable characters cut from such a specific millennial cloth is the toughest trick the series lands, and we're glad the cameras were running. — Nick Warren