My failed attempt at breaking a record. 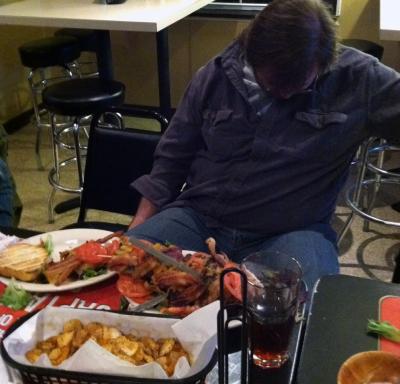 For future reference, perhaps the next time I perform a challenge of any kind, I should start the day in the correct state.

On the day of the "Bethcha Can't" Challenge at the Three B Saloon, I started about an hour and a half away from my dining destination. I'll blame my romantic side for this first misstep, as I had driven to the east side of Cleveland to surprise my girlfriend, taking her to a show late the night before.

Due to this schmaltzy holiday, I ended up waking up two hours later than I intended to. In Ohio. That's the danger of letting a woman get between me and my food, I suppose.

I lumbered out of bed, slowly making my way to the kitchen. I prepared a solitary piece of toast, adorned with a small smear of peanut butter. My stomach growled loudly. It called me a number of unsavory names, as I down the miniscule meal, saving myself for tonight's feast of eight 1/3-pound beef patties, 24 strips of bacon, 16 pieces of cheese, and lettuce and tomato all on one burger, served with half a pound of pub chips.

For days, I'd been consuming more food than some small countries see over the course of a year. A trip to the grocery store had snagged dirt-cheap food in large numbers. While a nutritionist would have smacked me if he or she saw my cart, my party pizzas were training my body to be a champion.

Today, however, was different. I craved food. My stomach's constant gurgling interrupted Jeff Tweedy several times during my trip back to Erie. My fridge called to me throughout the hours leading up to my meat meeting. Even my One-A-Day gummy vitamins tempted me, but my resolve would not be broken by fruit-shaped gelatin.

Eventually, the time for the challenge came. I arrived at Three Bs—some of my Erie Reader cohorts having already posted up at a table. I sat down and we ordered—several of the others ordering normal-sized suppers. The smells from the kitchen overwhelmed my senses, driving me to salivate extensively. I was ready for my meat.

Our food came out eventually. Curiously, I was handed half a rack of ribs and a side of fries. My body immediately began a small war. My brain's very confused about why I'm receiving this order, but my stomach's about to beat down the questioning grey matter with a rubber hose for preventing me from inhaling everything in front of me.

After a small discussion, the matter's cleared up. The waitress had confused our order for the al-you-can-eat rib special. As she went back to the kitchen to relay the message, my tablemates dined as my insides whined.

All my grumblings were pushed aside when General Manager J.J. Brown carried out a tower of meat, meat, and more meat and set it down in front of me. I held the beautiful building of beef up as he explained the rules to me. I was almost too entranced by the edible obelisk, its peak almost as high as my head when I sit.

Once J.J. gave me the signal, the burger and I became one. I ravenously attacked the first patty, chosen indiscriminately after toppling the tower. Bacon and lettuce hung from the juicy disc as I clamped my mandibles into it. My eyes rolled into the back of my head as the flavors hit my tongue—Tchaikovsky's "1812 Overture" played in my head as I fed.

Ah, the joys of mastication.

I quickly tore into the second patty, picking out random slices of bacon as I went. I began to gain confidence as I ravaged the doomed piece of meat. I had already finished a quarter of the monstrous burger, yet my insides had yet to feel any discomfort. Perhaps this challenge would not be as difficult as I had imagined.

Shortly, my jaws became tired. As my chewing slowed, my stomach began to question my task at hand. I tried switching to the pub chips to move my mind off meat, but my insides wouldn't have it. Suddenly, all the amazing parts of the meal disappeared, being replaced by complaints. The seasoning that was exciting before shifted into a sharp stabs of salt into my tongue, forcing me to drink more water, using up valuable space that my stomach had reserved for meat. The beef transformed from perfect patties into hockey pucks of pain.

I was about a third of the way through the challenge when quitting first entered my mind. Chants of "Bieler! Bieler!" urged me to press on, despite the cries of help coming from my body. I mulled over the idea over some chips, eating slowly as J.J. urged me to hustle through the food before my mind tells me I'm done. He had no idea.

All of a sudden, my internal distress disappeared. My body seemed to have hit a second wind. Renewed, I sat up in my chair, grasping the remains of a patty and chowing down.

It must have been some cruel joke that my body decided to play on me, because three bites later, my stomach closed down for good after witnessing how much food I had left to complete the challenge. Defeated, I grasped a slightly dirtied paper towel, swinging it over my head as my audience of Readerites and random patrons groaned in displeasure.

In the end, I had finished three of eight patties, approximately 2/3 of the bacon and 1/3 of the chips. I sat dejected as photos were taken of my shame.

Slowly, I brightened up. I may not have completed the challenge, but at least I gave it a fight. I had stood up for my fellow Readers and attempted an act of gluttony that would make my peers proud (and possibly slightly disgusted). Next time I have a challenge, I'll know how to approach the task at hand. The meat may have beaten me down, but I just looked at it on the bright side.

Now I had leftovers.