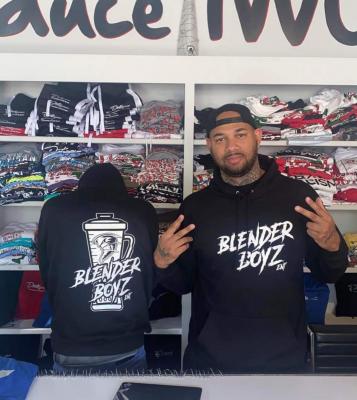 Fashion entrepreneur Kyle Harris shows off one of his Blender Boyz hoodie designs. In just six short months, the brand has already started to take off with help from other locals.

Fashion entrepreneurs Kyle Harris and Tae Hayes joined forces in October of last year to emerge with a clothing line that will send a message to every street and avenue in Erie.

With the city in the midst of finding its own distinct look, giving "the 814" a sense of pride and meaning, the two thread merchants had a desire to leave their mark as well and rank themselves among the apparel-creators shaping the local fashion scene.

Harris is a huge advocate of the value of teamwork and conversing with like-minded individuals, which all plays a part in the Blender Boyz theme. With the help of some of the biggest names in town, BB was able to take off. "Sean Madigan allowed us to sell with his brand Dotigan in the lobby of DuceTwo, which was a big help in Blender Boyz recognition," says Harris.

"Then Garrett (owner of Ink Xspression Tattoo and Piercing Shop) gave us the green light to sell our hoodies in his store at the mall." Two of the largest local co-signs took Blender Boyz from an idea to a growing local phenomenon.

Within the first month of its release, Harris and Hayes sold over 300 hoodies between DuceTwo and Ink Xspression. "The city really supports us. People have shown Blender Boyz love from day one," Harris states.

While utilizing two of the hottest spots around to get their brand to the people, Harris mentioned that a website is coming soon for online shoppers.