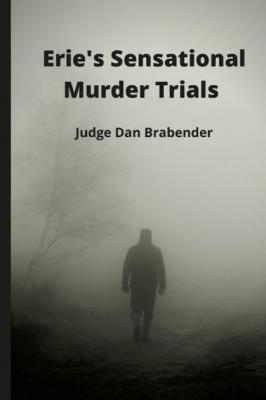 Judge Dan Brabender has compiled a collection of murder trials that occurred in Erie spanning 1895 to 1975, presented as "only a judge can tell them." And as you make your way through the book, where the stories of murders span from abjectly disturbing to those riddled with grey area, Judge Brabender truly shows you the full picture, from crime to sentencing. Jam-packed with details from psychological files and studies, the genealogy and biographies of the murderers, victims, lawyers and bystanders, as well as any appeals, executions, or commuted sentences, Brabender leaves no stone unturned in presenting these sensational cases.

Largely, Brabender leaves his personal opinions out of the book: he presents the stories in a way that lets you come to your own conclusions, while making sure his reader takes into account the social atmosphere of the time period when the crime occurred. Brabender himself was only personally involved with adjudicating one of the murderers in the book, upon appeal (in which he upheld the sentence of life in prison without parole).

The first two stories in the book concern two extremely brutal, disturbing, graphic murders rife with psycho-pathological behavior, but before one feels too overwhelmed, he switches the narrative and tells a story of an accidental murder of political intrigue and corruption, set during Prohibition. The book feels very balanced in that regard, allowing the reader some respite between episodes of brutality.

While there are some stories that are quite disquieting, there are others whose proceedings will fill you with the rage of injustice: like the aforementioned accidental murder in 1921, where the defense built their entire case on the fact that the shooter and witnesses were Black, therefore they "must have done it." Or the concluding story set in 1925, where a 22-year-old man was rejected for marriage by a 14-year-old girl, killed her father out of shame and revenge, and (spoiler alert) only served five years, largely because the jury believed his "impassioned love" for the victim's daughter justified his behavior.

Brabender also, when applicable, places the scene in the present day, clarifying the locations involved by describing what is currently in its place. Overall, I was totally riveted. I couldn't wait to find out what happened with each case and found myself not really able to put the book down until it was finished. Brabender has completed a massive research project in his volume, and any lover of true crime, especially a local Erieite, will find themselves intrigued. — Erin Phillips