Imbued with a sense of nostalgia and plumbing personal perspectives.

by Alex Bieler
View ProfileFacebookTwitterInstagramGoogle+RSS Feed
August 6, 2014 at 7:45 AM 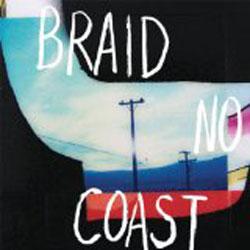 Back in 1998, Braid was a key band in the emerging emo scene after releasing the critically-acclaimed Frame and Canvas. One year later, the Illinois-based group disbanded, leaving fans without a full-length follow-up for 16 years. The years have been kind to Braid on new album No Coast, a 12-track collection that finds the once antsy boys from Champaign possessing a more mature, polished swagger. Lead singers Bob Nanna and Chris Broach look back upon the past amid hook-laden tracks, imbuing No Coast with a sense of nostalgia. "Another drink, another lifetime of regret" sings Broach on the impressively catchy "East End Hollows," plumbing personal perspectives from the past, yet never crossing over to bitterness in their propulsive guitar-led tracks. Braid is not the frantic, high-energy band of the '90s, and they're okay with that. With the results on No Coast, their fans should be as well.