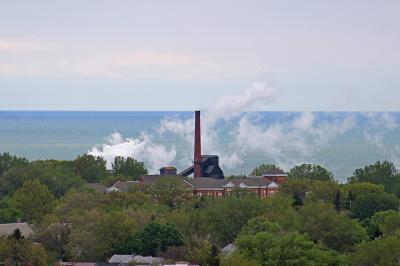 So far in 2019, the Pennsylvania Department of Environmental Protection has recorded 17 violations for the Erie Coke plant at 925 E. Bay Drive. Two years ago, Erie Coke was the county's top emitter of ammonia, benzene, nitrogen oxides, PM2.5 (particulate matter) and sulfur oxides.

From pop songs to t-shirts to coffee mugs, it seems like everywhere we look in our stressed-out society, we're encouraged to just breathe. Though it can feel frivolous to focus on an involuntary process, something happens when we breathe with more awareness. Time slows, tension eases, and the next moment feels better than the last.

In one recent study, researchers concluded that air pollution — particularly from carbon monoxide and particulate matter — had a "significant negative effect" on the ability of Major League Baseball umpires to make accurate calls.

The researchers found that "short-term exposure to air pollution affects the work performance of a group of highly skilled, quality-focused employees." They conclude, "Recent evidence points to the effect that air pollution may have on how well people do their work. If detrimental impacts are significant in size and sufficiently widespread, then the economic burden associated with such effects could rival the direct health effects."

Filippini also emphasized that poor air quality may discourage people and companies from moving to a region, and that young people may not choose to stay here — a central point repeated by Hold Erie Coke Accountable (HECA).

Nevertheless, in the Erie Times-News, you may have seen this late-April headline: "Erie region among cleanest in air report."

But the article, recounting the results of the American Lung Association's [ALA] annual report card for air pollution, went on to explain that "Erie and Meadville are grouped together, though the only official air pollution monitor in Erie and Crawford counties is located in the city of Erie."

In a letter to the editor, Filippini further clarified this somewhat misleading headline, and the incomplete report to which it refers, adding that the ALA report "doesn't reveal areas of Erie County where air quality may be poor, unmonitored and potentially threatening public health."

We've talked before about the grievous lack of air quality monitors in our community, especially downwind of Erie Coke. And Erie's existing monitors also don't register levels of all potential pollutants.

Meanwhile, Erie Coke continues to violate air quality regulations, as Pennsylvania's Department of Environmental Protection (DEP) noted in a letter to Erie Coke on May 9. DEP stated that it has "identified unresolved existing or continuous violations of the Pennsylvania Air Pollution Control Act," adding that "No operating permit or plan approval can be issued, reissued or modified to either Erie Coke Corporation or any related party until these violations and your lack of intention or ability to comply are resolved." DEP is currently reviewing Erie Coke's application for renewal of its Title V operating permit.

DEP's letter includes a list of unresolved violations between June 3, 2017 and April 16, 2019. In 2019 alone, 17 violations are documented, including the emission of fugitive particulate matter outside of the property, the flaring or combustion of coke oven by-product gas with excessive hydrogen sulfide concentrations, and detections of malodors outside of the property.

Let's look first at particulate matter. In "Health and Environmental Effects of Particulate Matter (PM)," the EPA states that "Numerous scientific studies have linked particle pollution exposure to a variety of problems, including: premature death in people with heart or lung disease; nonfatal heart attacks; irregular heartbeat; aggravated asthma; decreased lung function; and increased respiratory symptoms, such as irritation of the airways, coughing, or difficulty breathing. People with heart or lung diseases, children, and older adults are the most likely to be affected by particle pollution exposure."

DEP documented a release of particulate matter into our air by Erie Coke on February 15.

And then there's hydrogen sulfide.

In its "Public Health Statement for Hydrogen Sulfide," the Agency for Toxic Substances and Disease Registry (ATSDR) states that "Studies in workers, communities living near industrial sources of hydrogen sulfide, and volunteers suggest that the respiratory tract and nervous system are the most sensitive targets of hydrogen sulfide toxicity."

ATSDR adds that "Exposure to low concentrations of hydrogen sulfide may cause irritation to the eyes, nose, or throat," plus "difficulty in breathing for some asthmatics," as well as "headaches, poor memory, tiredness, and balance problems."

And there are no hydrogen sulfide monitors in the Erie area.

In other words, we have no definite way of measuring the exposure of our people to this irritant. And while hydrogen sulfide causes a pronounced rotten egg smell detectable at low levels, "At high concentrations, a person might lose their ability to smell it," explains ATSDR. "This is important because a person might falsely think that hydrogen sulfide is no longer present; this may increase their exposure risk to air levels that may cause serious health effects."

And this substance is only one of those associated with coke oven emissions, which the U.S. Environmental Protection Agency (EPA) describes as among the most toxic of all air pollutants, according to Filippini.

According to the EPA, "Short-term exposures to SO2 [sulfur dioxide] can harm the human respiratory system and make breathing difficult. People with asthma, particularly children, are sensitive to these effects of SO2."

While we clearly need more air quality monitors to accurately tell us what we're dealing with, it seems we also need to let ourselves truly feel what it must be like for those coping with hazardous air pollution, in our community and beyond. In our efforts to make Erie a genuinely livable city, we can't allow pollutants to remain unmonitored or insufficiently regulated.

EPA adds that sulfur oxides can also contribute to particulate matter, damage foliage and decrease growth of trees and plants, and lead to acid rain. Additionally, "SO2 and other sulfur oxides can react with other compounds in the atmosphere to form fine particles that reduce visibility (haze)." Some Erieites have recently attended the Smoke School Visible Emissions Training Program through Penn State to become certified "smoke readers" who may recognize harmful emissions.

"Making life unpleasant" lacks the urgency of many issues we're inundated with on a daily basis. But do we need horrifying details to move us to act? Is it not enough that our quality of life could be substantially compromised by the air we're breathing — and we don't even have reasonable data collection?

At this point, I've filed away so many articles connecting air pollution to declining health that I can scarcely keep track of them. And I wonder if more statistics are really the best way to convey the magnitude of the issue.

While we clearly need more air quality monitors to accurately tell us what we're dealing with, it seems we also need to let ourselves truly feel what it must be like for those coping with hazardous air pollution, in our community and beyond. In our efforts to make Erie a genuinely livable city, we can't allow pollutants to remain unmonitored or insufficiently regulated. Our DEP needs to know that we won't settle for another insufficient permit. Mayor Schember and both our city and county councils have formally voiced their concerns, but it's up to all of us to keep pressure on our DEP and elected officials to get this right.

"Inspire" can simply mean to breathe in. But it also refers to that urge to think, act and create. Let's take a deep breath and get going.