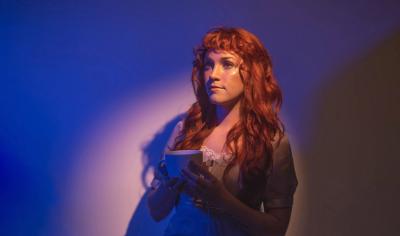 Local indie pop singer-songwriter Brooke Surgener is ready to have audiences see and hear her new album in big ways.

The 11 tracks of Moon Waves came together over time, each written in a different place, both emotionally and physically.

"Each song tells a different story about a collection of events I've written about over the years," Surgener explains. "The name of the album represents the songs I've written in that time frame experiencing love, loss, friendship, doubt, depression ... everything we all experience, bringing me to who I am today."

For years, Surgener has been a multi-hyphenate talent. In addition to being one of the most talented and accessible original songwriters in the region (playing guitar, bass, banjo, and more), the 2014 40 Under 40 honoree records and edits her own tracks (with help on the new record from Zach Zurn at Carpet Booth Studios in Rochester, Minn.) She's even taken to recording songs in the place they were written — whether it be a cabin in the woods, or her own living room — to recreate and capture the specific emotions she felt when penning each song.

Surgener has grown into a formidable YouTube presence as well, both directing and editing videos for herself and other local musicians. An avid cosplayer, she created detailed outfits drawing from pop culture for many of her earlier videos.

Surgener's latest videos this year include album cuts "Tidal Waves," "Gimme Gimme," "I Hate You the Least," and "For My Dog" (not to mention the previously released single "Be Your Babe" which also appears on the album), each one with its unique look and theme.

Those videos, along with behind the scenes footage, will be projected during her album release show.

"The venue will be decorated to the color scheme of (purples, blues, pink and gold) of the album to bring everyone into the vibes," Surgener noted. She hopes that guests will "get lost in the atmosphere I tried to represent through my music in the album, hoping that everyone can walk away from this show taking away something from it."

The tracks on Moon Waves cover a wide range of emotions and issues. There are more lighthearted (and perhaps coincidentally, older) tracks such as "Dirty Girl" and "Be Your Babe" paired with the emotional catharsis of "Tidal Waves," in which Surgener directly deals with the tragic loss of her father, Brad.

It's that complex combination of vulnerability, honesty, and humor that makes Surgener's songs hit as well as they do.

Joining her for her album release will be two songwriters who know that combination very well. Pittsburgh's Halloway Williams will open the show, followed by Optimistic Apocalypse — the quartet fronted by Mckenzie Sprague, Surgener's friend of many years. Both songwriters have a dense lyrical style that expertly deals with complicated feelings and concepts, deftly weaving them together with emotionally resonant music.