Busty and the Bass // Eddie

The eight-piece band features a full horn section for an album filled with expert musicianship, and a fair amount of cheesiness

by Nick Warren
View ProfileTwitterInstagramRSS Feed
August 26, 2020 at 10:15 AM 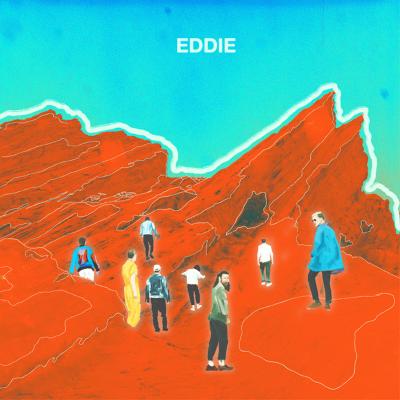 It's a bit of a gamble to start off your album with a guest vocalist, let alone an incredibly recognizable one, but it pays off for Busty and the Bass. With Spider-Man's own Macy Gray providing her signature gravel on the opening track "Out of Love," it surprisingly works. Somehow, dual vocalists Nick Ferraro and Evan Crofton (a.k.a. Alistair Blu) transition so seamlessly from Gray's track that you forget about her until the next guest, though that next guest does happen to be George Clinton himself. Iconic guest spots aside, Busty and the Bass deliver, proving that a group of (mostly-white) Canadians can have tons of soul. There are the smooth, floating tracks like "Clouds" with Amber Navran, and "Go So Far" with Illa J and Jon Conner, and soaring ballads like "Summer," along with Rex Orange County-esque standouts like "Figure It Out." The eight-piece band features a full horn section (including Ferraro on alto sax) that it employs perfectly. There are remarkable moments filled with grace, constantly backed by expert musicianship — and a fair amount of cheesiness — in every one of the album's dozen tracks.
— Nick Warren