This original mystery takes to the seas in the Victorian Princess 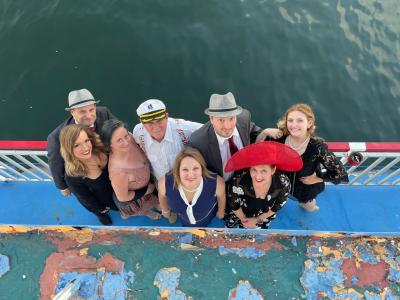 If you follow local theater, then we're pretty sure you know Adele Crotty. Winning the Best of Erie Award for Best Local Actress three years running, she's one of the hardest working people in the local theater community. Now, for the first time, she's taking on not only the directing duties, but wrote the original play.

It's not your standard play either. Murder on Misery Bay is a thrilling and hilarious new murder mystery that takes place on a genuine riverboat. Erie's own Victorian Princess provides the one-of-a-kind interactive backdrop for the performance, with gorgeous views and deadly intentions everywhere in sight.

"The play revolves around a river boat cruise, captained by a father daughter duo. They are new to the scene as the previous captain has gone missing," Crotty detailed. "There is a death, of course, and everyone is a suspect. Two musicians who don't seem to know much about music, a wealthy widow, a seemingly naive waitress, a ditzy entertainment director, along with some other special surprises."

One surprise so far came at a dress rehearsal, when local police swarmed the boat. A concerned citizen saw what looked to be a possible hostage situation involving a prop gun. Needless to say, things were clarified before the cast got back on land; the officers even joked that they had become "part of the show." They now alert the police prior to each performance just in case.

Crotty credits Duryea Gette of the Victorian Princess for asking her to write something specifically for the boat, combined with Justin Moyar Events' urging to produce the show and dinner, along with her Uncle Luke Desmone, who recently passed away. "He was a huge inspiration to me when it came to not being afraid to go out of my comfort zone especially in regards to writing and acting," Crotty explained. "His encouragement had a huge influence on me following through with this project."

Guests are encouraged to follow the clues closely and there's a custom prize awarded if someone answers every question correctly. The evening includes a three-course dinner catered by Calamari's, and a sunset cruise on the bay. — Nick Warren