by Nick Warren
View ProfileTwitterInstagramRSS Feed
May 14, 2020 at 4:30 PM 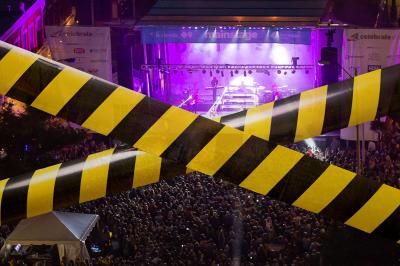 Erie County Executive Kathy Dahlkemper was joined by the City of Erie Mayor Joe Schember. Schember was quick to thank the county's staff, along with essential workers, adding that it was National Police Week.

Following this, Schember explained that The Sounds of Summer, Lights Over Lake Erie, and Celebrate Erie would all be postponed.

The Sounds of Summer will be postponed until June 2021. The City is currently exploring live streaming and televised events at the moment.

by Hannah McDonald6/8/2018, 11:00 AM
"Sounds of Summer Concert Series" will be held at eight senior living homes across the city.

Lights Over Lake Erie will be postponed until Labor Day weekend, taking place Sunday, September 6 at 10 p.m., though this date could be subject to change as well.

'Lights Over Lake Erie' Delivers Boom Before Fourth of July

by Cara Suppa6/20/2018, 2:30 PM
This year City Hall and Mercyhurst University are delivering the boom with Lights Over Lake Erie

Celebrate Erie will be postponed until August of 2021. The Celebrate Erie planning committee is reviewing ideas for an "814 Day" on Friday, August 14, with more details to follow.

Celebrating Erie from the Chalkwalk to the Mainstage

by Nick Warren8/14/2019, 2:45 PM
There's bound to be something for everyone — lifelong Erieites, visiting guests, and returning students — as long as they don't mind a little celebrating.

Outside of the City of Erie, Millcreek's 4th of July Parade, along with Lawrence Park's festivities and fireworks have been canceled. Lawrence Park has also canceled their monthly street dances and park activities.

The decision to postpone the events comes after six weeks of careful research and continued discussions with the Erie County Department of Health, city officials, and the Celebrate Erie planning team, and local event organizers. We want to ensure the safety of attendees, staff, and the community-at-large," Schember explained.

"This was not an easy decision, but I believe it's the right decision," the Mayor said. An event which sees an attendance of nearly 200,000 over the weekend, "CelebrateErie is one of the region's largest events, but public safety is our top priority. We're hopeful that the event will return in 2021, and be bigger and better than ever."

Schember also went into detail about the city's public parks, which were closed on March 20.

All park facilities will remain closed for the foreseeable future.

"We received requests from residents to gather in our parks for parties or picnics, playing recreational sports, or holding 3 and 5k runs," said Schember. "Since there is still no treatment or vaccine for COVID-19, it is vital for the health of our community that we all refrain from gathering in large groups while we move towards the Green phase."

Within City-owned parks, summer leagues, camps, and recreational programs will not be permitted while under the yellow phase of reopening. In addition, basketball courts (their rims removed on April 3), tennis courts (their nets removed), playground equipment, the city's skate park, picnic areas (including pavilions), group exercise parks, and restrooms will all remain closed.

"We encourage everyone to continue to stay active and healthy. You can exercise at home. In city parks, "you are still permitted to do things like walk, hike, ride a bike, or run" Schember noted.

Residents may also walk their dogs, and it was noted the gates at the McClelland Park Dog Park are now open to cars.

The Downing Golf Course and J.C. Martin Golf Courses are now open, and golfers are permitted as long as they follow appropriate masking and social distancing procedures.

"COVID-19 is an incredible challenge for all of us, but I am sure we will all learn from this very unusual experience. It will probably still be months before the threat of sickness and death is brought under control," Schember admitted. "I'm convinced that we will come out of this as a better, more knowledgeable, and closer community than we ever have been before."