Erie will be doing its part for The People's Climate March on Saturday, April 29.

by Nick Warren
View ProfileTwitterInstagramRSS Feed
April 26, 2017 at 10:45 AM 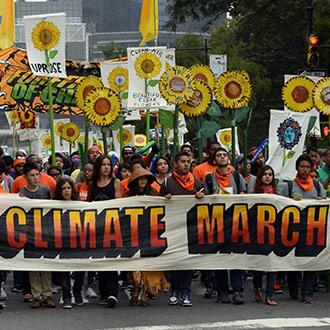 The People's Climate March in Washington, D.C. is set to gather a huge crowd of supporters. Additionally, "sister" marches will be held in hundreds of locations around the country on Saturday, April 29. In a similar fashion to the Women's March, Tax March, and the March for Science, Erie will be doing its part, as well.

Headed by the local organization Our Water, Our Air, Our Rights, the march will begin at 2 p.m.

The location of the march is one you might be familiar with. Event organizer Sam Miller explained that "following the Erie Reader story about the toxic air emissions from the Erie Coke Plant on the Lake Erie waterfront at the foot of East Avenue, we decided to plan the Erie Climate March on East Avenue."

Penned by Katie Chriest, the article in question appeared in our March 1 issue. The cover story was titled "Clearing the Air."

The march will proceed west toward the plant and head north on East Avenue, passing the Barber National Institute and ending at Wayne Park at the corner of East Lake Road.

The event will begin at the beach and boat ramp at the bend of East Avenue, across from the Erie Coke plant. The march will proceed west toward the plant and head north on East Avenue, passing the Barber National Institute and ending at Wayne Park at the corner of East Lake Road.

Wayne Park will serve as a rally site, with music and environmental speakers. The rally is expected to conclude at 4 p.m.

The Sisters of St. Joseph, Unitarian Universalist Congregation of Erie, Solar Revolution Erie, Sisters of Mercy, S.O.N.S. of Lake Erie, The Erie Benedictines for Peace, and the Benedictine Sisters of Erie helped to sponsor the event. The Pennsylvania Chapter of the Sierra Club, and the Lake Erie Group endorsed the event.

"We expect a very large turnout, and have provided 600 surgical face masks for the first 600 people to wear in the march as protection from the toxic emissions from the plant," Miller detailed. "The neighbors living downwind of the plant have experienced an abnormally high incidence of cancer and we will be pressing for a health survey and study as the basis for more strict air pollution regulations and controls under the EPA Clean Air Act." – Nick Warren

2 to 4 p.m. // Beginning at the boat ramp at East Avenue, ending at Wayne Park // for more information, visit peoplesclimate.org/sister-marches or contact Sam Miller at 716.713.8621