by Liz Allen
View ProfileFacebookTwitterRSS Feed
October 19, 2021 at 10:30 AM 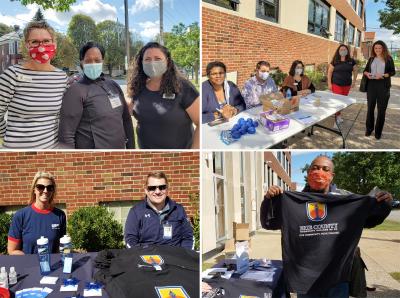 Saida Harper, 36, a stay-at-home mother of three, said that as she studies information technology at the new Erie County Community College, she also hopes to improve her conversational English. One day, she said, she may even combine her new IT skills with her law degree from Russia, her native country.

Tinya Thomas, 50, enrolled in the community college's liberal arts program at the urging of her husband, Jason. She has a GED, studied as a paralegal, and got certified as a home-health aide in 2002. "I always wanted to go to school to further my education. I'm very inquisitive. I love learning," she said. "This opportunity is too good to let go by. Maybe someday I'll open my own business."

Erie County Councilman Andre Horton, 61, is taking an English class at the college because he's writing a book. Next year, after he retires from his job as a union laborer, he may go on to earn a degree. Tuition is currently free for Erie County residents, thanks to funding by Erie County Council through the American Rescue Plan. The ARP funds and donations are covering tuition for now because until the college is accredited, students are not eligible for financial aid.

But Horton is paying for his college course. Horton co-chaired Empower Erie, the group that successfully advocated to move the community college from long-time pipe dream to reality. By paying for his tuition, he wants to reinforce the message that even at the normal $160-per-credit-hour rate, the Erie County Community College is affordable, especially for those who didn't take a traditional path to college after high school.

These three adult students are among those who began classes in the college's new 12-week term, which started Sept. 29. The college's 16-week term began Sept. 1. The eight-week term starts on Oct. 21 and the spring term on Jan. 10. Applications are accepted on a rolling basis, until the day before classes begin, although students are encouraged to apply with more lead time. There are also additional fees, including a $40 one-time new-student fee.

On the day when Harper, Thomas, Horton and other new students prepared to walk through the door at the Benedict Education Center at 330 E. 10th St., two deans and three other staff members were on hand to greet them, provide masks, and give them a small fruit-flavored snack. They were also ready to provide helpful solutions, such as when Thomas said she was having difficulty logging on to her classwork at home.

At a nearby table, Kristen Piccirilli and Christopher Hanes, from First National Bank, handed out free T-shirts with the EC3PA logo — a blue drawing of the Bicentennial Tower, set against an orange and yellow sky, with a blue and white border and the tagline, "Our Community, Your College." They also explained the bank's checking plan for college students.

College offices are located in the basement, and classes take place on the third floor; the Benedictine Sisters maintain their ministries on the first and second floors. Once students are admitted after showing their IDs at a front-desk window, they enter a space where handsomely tiled walls create a sense of tradition and serenity. The sleek new desks, computer stations, and big-screen projector systems signal that this building, which opened as St. Benedict Academy in 1955, is up to the task of educating students with up-to-date technology.

Administrators like to introduce themselves to students and memorize their names because they want the new collegians to know that the community college will support them from the beginning. Do you remember the daze of freshmen orientation? Imagine that nervousness combined with qualms about starting college years after you last set foot in a classroom. Or put yourself in the shoes of someone whose native language isn't English or faces a setback because childcare plans fall through or a transportation issue arises.

"Life gets in the way," said Dr. Christopher Gray, president of EC3PA, as the Erie college is known. "A $40 flat tire can derail you."

Gray, the college's two deans, and their colleagues are there to keep students on track. All active students receive free EMTA bus passes. Parents have been introduced to the Sister Gus' Kids Café after-school program, run by Emmaus Ministries at 310 E. 10th St., just west of the college, and the college is working on securing childcare services.

"My mission and my passion are to help people better their lives and to make sure they feel like they belong in a college setting," said Keri Bowman, dean of student support, success, and enrollment management.

Rebecca Walker, dean of applied programs, student success, and innovation, also is passionate about her role — to help the new college students acquire skills that will lead to a good job when they are finished. "Education changes generations," she said.

They have more than an academic interest in making sure that Erie County is a place where affordable education leads to good jobs and an improved quality of life. Both women grew up here — Bowman attended General McLane High School, while Walker went to Iroquois High.

Before being hired at the Erie County Community College, Bowman was dean of student success at Northern Virginia Community College and Walker was associate dean of sustainability, business, and career technologies at Elgin Community College, about 35 miles northwest of Chicago. When the two educators moved back to Erie, they became part of Erie's brain gain, Dr. Gray said.

Family ties played a role in enticing Bowman and Walker to join EC3PA, but it's the opportunity to be part of a new college with mission-oriented goals that sealed the deal.

Bowman, 50, got an early look at how a community college education opens doors. "My dad went to a community college when I was little," she said. "I watched his college career unfold in such a dynamic, comforting environment." Her father, the late Don Bowman, became a registered nurse and worked at  Edinboro University of Pennsylvania's health center.

Bowman spoke candidly about "some trials" she faced when she started college at the University of Pittsburgh. "I had a really, really good time," she said with a laugh. She came back to Edinboro for her undergraduate degree, then earned her master's and Ed.D. at North Carolina State in higher education administration. She decided to concentrate on higher ed after working in the North Carolina prison system, where she saw "real and true racism" firsthand. That experience made her decide to help people to "better their lives and to make sure they feel like they belong in a college setting."

Her mom, Sandy Bowman, helped to "plant the seed" that Bowman should apply for a job at the Erie college by sending her newspaper clippings about Empower Erie.

Walker, 42, was not familiar with community colleges until she went to school in Kentucky. As she struggled to pay for college, she met roommates and hallmates who had already taken many courses at low-cost community colleges. "I was surprised that people had access to something that I didn't," she said. "I got a four-year degree in art, which did not get me a great job but did leave me with a lot of debt," she added.

After graduating, she taught overseas, mostly in Cambodia. "When I landed in Chicagoland, I ended up working with refugees and immigrants," she said. "I fell in love with that community and adult education."

Her passion is narrowing the skills gap, to guide community college students into technical fields so that they are equipped to move into a job -- truck driving, heating, ventilation and air conditioning, welding or fire science, for example — when they are done.

Some community college students will also take the next step, by enrolling in a traditional four-year college. "Students who start and do two years (at a community college) are more successful when they transfer," she said.

Gray, the college president, said that community colleges do the "yeoman's work" of preparing vulnerable students to succeed at four-year institutions, noting that 60 percent of those who graduate from four-year schools have already taken courses at a community college.

Bowman and Walker decided they couldn't pass up on the chance to be part of that success story in Erie. Helping to launch a new college requires a lot of adrenaline, said Bowman.

Beyond the daily rewards of meeting new students and walking them through the programs, there are also the rewards of being back in Erie.

For Bowman, that has meant enrolling her daughter at General McLane, her alma mater, and staying, for now, with her widowed mom. For Walker, it's living here with her husband and two little kids, who are now surrounded by "aunts, uncles and grandparents." It's taking the children to Sara's for an orange-twist cone, then sitting on the beach and listening to the waves.

Those other sounds you will hear in the near future? Those will be Erie employers, saying, "Wow! Look at this! We have people to hire," Walker said.

Liz Allen is thrilled that Erie finally has a community college, 20 years after a consultant's report, "Toward an Economic Development Strategy for Erie," by Brian Bosworth, urged Erie to create one. You can reach her at lizallenerie@gmail.com.

To learn more about the Erie County Community College, visit ecccpa.org, where you can also find a blog by Dr. Chris Gray, college president. In addition to classes at the Benedict Education Center, 330 E. 10th St., the college is using space at the Corry Higher Education Center and offering big lectures, labs and field experience at the Tom Ridge Environmental Center on Fridays. Classes will begin at the Regional Career and Technical Center, 8500 Oliver Road, on Oct. 21. There are also online classes. Students all have access to use the resources of the Erie County Library and the libraries at  Penn State Behrend and Edinboro University of Pennsylvania.