Music itself is a dance with Consider the Source 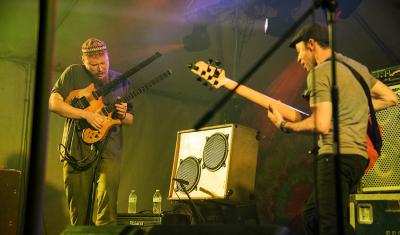 Within the universe of the NYC trio of avant-jam masters known as Consider the Source, music itself is a dance.

The sounds made by the brainchildren of (fretless double neck) guitarist Gabriel Marin, bassist John Ferrara, and drummer/percussionist Jeff Mann effortlessly marry old, deep Middle Eastern and world influences with jazz, metal, funk, and a gamut of musical techniques — including all the best elements of the Information Age-inspired new school of improv-based live music-making.

They say — and they're right, I've seen it — that all kinds of people, from hippies and freak folks to metalheads and prog nerds, can really dig where they go and what they do.

They've been pushing the edges of the sonic envelope and expertly making a good joke of any standard genre typification since 2004. And, well, they're pretty damn amazing.

This is how they've put it themselves: "If intergalactic beings of pure energy, after initiation into an order of whirling dervishes, built some kind of pan-dimensional booty-shaking engine, powered by psychedelics and abstract math, it'd probably just sound like a CTS tribute band."

As you should expect, then, Consider the Source is straight-up awesome live, so catching them in their elements — especially when they're gathering those elements up right here in Erie — is, well, most definitely worth considering.

And word that the stellar Galactic Duo of bassist Tony Grey and drummer Ian Maciak (two more world-renowned improv masters who call Erie their central command) are also performing on the same night and in the same place would make the call good and done.

CTS and Galactic Duo are taking a couple of fantastic voyages both upstairs and down at the Kings Rook Club on Friday, May 18.

We recommend you get in there (er, get out there) if you can, because it's most likely gonna be a grand evening of mind-bending music at the Rook. — Ryan Smith