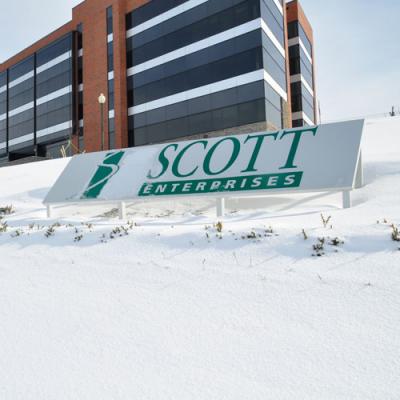 In 2010, Erie's Bayfront bluff was wildly overgrown with invasive species and littered with garbage. While teenagers made their way through rough terrain to Presque Isle Bay, folks along the top of the bluff could rarely glimpse the water. Enter the Erie Community Foundation.

In 2011 the Erie Community Foundation announced a gift to the city: a "Bayfront Beautification Project." Running thirteen blocks from Cascade to Wayne streets the "linear park" was designed to provide "safe pedestrian access to the Bayfront" in a "scenic park-like vista" featuring "shrubbery, flowers, and trees."

Almost three years into the project, there has been some success: there are some better views of the bay and there are isolated gardens developing here and there. But the bluff is missing too many trees, and getting down to the water is neither easier nor safer.

Instead of promoting access, the focus seems to have been on clearing the bluff to install corporate logos-on-stilts. While Erie's zoning code does not permit advertising signs on the waterfront, the signage was described as "part of the park." Apparently members of Erie City Council agreed with this view, eliminating the need for a conversation with zoning officials.

Semantics aside, the signs randomly dotting the bluff are harmless: this "billboard alley" can be cleared in a few days. The trouble seems to be the lack of a well-designed plan for an urban park. Like the Pittsburgh consultant's organizational plan for the former GAF site, this park (so far) seems to be a suburban design. Built in isolation, suburban designs ignore the street grid (and their neighbors) and care most about the movement and storage of cars and trucks.

In vital places, the "negative" space around each "built thing" is as important as the built thing itself. Consider a living room large enough for two couches and chairs: the seating will often be organized around an open center. A "negative space" is created in the space the furniture surrounds. In a city, the negative space between built things helps define the quality of the public realm: its walkability, its destinations, its vistas, its sense of excitement and energy, or sense of enclosure and protection. These experiential qualities define a city.

Erie deserves a landmark on the Bayfront Bluff. After clearing, the first priority should have been to start building the bones of this new "place" – a series of paths and plazas. From the top of the Erie bluff, multiple paths could have linked to each other and to the whole roster of existing open spaces near the water: Lakeview Cemetery, Land Lighthouse Park, McCarty Memorial Park, Barber playground, Soldiers & Sailors Cemetery, Wayne Block House, Soldiers & Sailors Home, Mill Creek, Amendola Memorial Field, Dobbins Landing, GAF site, playground at Front and Wallace, the park at Front and Chestnut, playground at Walnut and Second, Liberty Park, Levy Jaycee Park, Bayview Park, Allen-Hetico Field, Nitkiewicz park at Cascade, the Strong Vincent field, and Frontier Park.

And what about the streets? In 1913, John Nolen proposed that Erie consider taking the major arteries and linking them to the water with pedestrian bridges or cuts through the bluff, as has been done at State and Holland. Perhaps these ideas are not feasible, but couldn't we consider grand staircases at Liberty (to Liberty Park), Sassafras (to the former GAF site and Convention Center), and at Parade and other main boulevards?

Each staircase could be connected to each other via blocks-long, Americans with Disabilities Act-compliant paths. As paths diagonally crisscrossed the hillside, they could provide a gentle grade for pedestrians and people using a wheelchair or pushing a stroller or bicycle. Within the network of paths, an occasional mini-plaza could allow people to rest or gather to watch the sunset. Walkways could be designed around existing mature trees.

Prior to last year's cleaning and clearing, a Bayfront Promenade was installed along the top of the bluff. An outcry by some residents led to a design-modification of the most "view-blocking" elements of the controversial fencing. Though some homeowners are still not pleased, the pathway has proved to be very popular. The Port Authority reportedly has two additional walkways planned. But why aren't these plans visible to the public ahead of time? Why not involve stakeholders and residents in the planning phases, rather than building first, and then dealing with concerns?

Shouldn't the Port Authority and the Erie Community Foundation post site plans to permit community discussion of this important project? What kind of park is worthy of overlooking our "regional crown jewel?" Since we built a highway between the water and the bluff, we should look for inspiration from other places that elegantly handle traffic. Instead of creating a junior Peach Street, we should aspire to something as gracious as Cleveland's Martin Luther King Boulevard. The Erie Bayfront Bluff Park will take years to finish. But, judging from how things are going, it will be "good enough" rather than great.

Our problem is a lack of good planning. Well-meaning groups sometimes (unintentionally) harm Erie's public realm. Consider the EMTA decision to create a gigantic bus garage, office, and parking lot for employees. Using eminent domain, the EMTA acquired property and forced a successful business to relocate. The EMTA demolished viable buildings including the massive Cold Storage structure (which alone cost an estimated 2 million to tear down). Worst of all, EMTA's decision to close a railroad underpass – Division Street – forces low-income residents to walk extra blocks before heading north. Now, instead of walking to school from their homes north of 16th Street, Peifer-Burleigh students take a bus. Closing a connecting street reduces circulation options and isolates neighborhoods.

As residents of Erie, we don't have to settle for "good enough." Like our collective great-grandparents who commissioned John Nolen's city vision, we can ask for – and receive – a world-class masterpiece on Erie's Bayfront bluff.