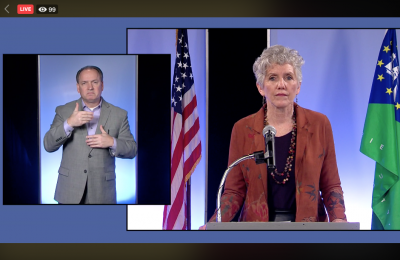 Pennsylvania Secretary of Health, Dr. Rachel Levine today reported that there had been 1,146 new positive cases of COVID-19, bringing the statewide total to 25,345. There have been 584 deaths due to complications of the disease.

Beginning at 3 p.m., Erie County Executive Kathy Dahlkemper announced that there were no new cases in Erie County. So far, there have been 40 documented cases. For the first time in any of her addresses, Dahlkemper reported the number of recoveries, at 17. There have been 1,129 negative cases tested.

Dahlkemper went on to restress the importance of social distancing and wearing a mask when in public.

She addressed comments regarding the correlation between low numbers and a lack of testing, saying that "while you are not wrong that we haven't had adequate testing, according to what we would really like to have, neither have any other counties. But we do know that about 25% of the people who are positive for COVID-19 do not even have any symptoms." She continued, saying that "we are not aware of any bottlenecks, any testing backlogs, or any shortage of supplies here in Erie County for those who are deemed necessary to be tested." She later reminded listeners that "only those who are symptomatic are getting tested at this point," and noted that "those with little or no symptoms are really the biggest risk of spreading COVID-19, especially if you aren't taking precautions like wearing a mask when you're outside of your home."

She clarified that "there is no expectation of blanket testing here in Erie County at this point."

For additional information, residents can go to the county and The Erie County Department of Health's website at eriecountypa.gov, and at (814) 451-6700 for questions about symptoms, or enforcement issues.

For anyone experiencing anxiety and questions, they are instructed to call the helpline at 814) 273-7007.

Though there was a "Rumor" hotline as well, Dahlkemper explained that this line is scheduled for discontinuation at 5 p.m. April 14.

During National Public Safety Telecommunicators Week (April 12-18), the public is encouraged to send them a note of thanks at public.safety@eriecountypa.gov.

Janet Anderson, of NWPA Job Connect joined Dahlkemper in the studio. She outlined the ongoing efforts of the organization, which provides career services to individuals and small businesses. For services and more information, you can call (814) 853-5254 or (814) 853-5829, or by Facetime at (814) 853-3942 or Skype at northwestpacareerlink@gmail.com.

As talk of restarting the economy begins, Erie's place in the matter was questioned. Though Erie County's numbers have so far been much better than other parts of the state, Dahlkemper noted that "we are beginning to have some discussions, and reaching out to our counterparts on the state level to see what this looks like. But it's not going to be this week, and it's not going to be next week."