Crossing Swords is a Royal Raunchfest

Though pegged as crude, the new series at least tries to stay sharp 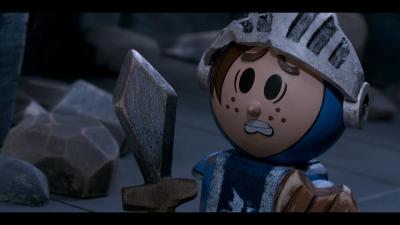 The Middle Ages, a time of kings, jousting, and 24-hour plague? Season One of the new stop-motion comedy Crossing Swords (from John Harvatine IV and Tom Root, producers of Robot Chicken), is now streaming on Hulu. The series follows a peasant named Patrick, voiced by Nicholas Hoult, who wishes to be different from his siblings who pursued careers in piracy, roguish pillaging, and comedy. He gets a job as a squire, and soon finds out that making the kingdom a better place is low on the list of priorities in the eyes of the royal court. A lusty queen with a special dungeon and a bloodlusting king with the attention span of an 11-year-old make for medieval mayhem.

Crossing Swords is not groundbreaking, but that doesn't make it bad. Some criticism could be a result of the popularity of animated shows that are marketed towards adults nowadays. Rick and Morty and Bojack Horseman both use crude humor, but woven into thought-provoking plots that explore complicated themes like nihilism and self-destruction. As a result, the bar is set pretty high, and animation for adults is expected to be deep and/or relatable. However, prior to these shows being released, there was no expectation. Robot Chicken took dolls and made them say and do unspeakable things; its tenth season just aired in June of 2020. Crossing Swords comes from the same minds, and follows the pattern of relying on being crude and graphic for its humor (complete with full-frontal nudity, and gore that could appear in Game of Thrones). Though lacking depth, the show offers impressive stop-motion animation — such as a dragon breathing colorful cotton fire — especially considering the self-imposed limitations of utilizing armless wooden peg dolls for its cast. It is also fun to watch modern things get a medieval spin, like when the princess attends a music festival called "Beast Feast," that feels like a Renaissance Faire mixed with a rave. So even though it doesn't offer anything new, Crossing Swords still makes for an enjoyable watch.