A reworking of the Arthurian legend, the popular saga finds a home with young adult audiences 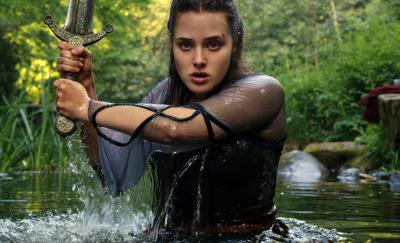 Though viewers who see Frank Miller's name attached to this project will no doubt feel somewhat shortchanged, there's a lot of good to be had from Cursed. The new Netflix series feels like a far cry from medium-defining comics like The Dark Knight Returns, Sin City, and (to a lesser extent) 300. Though, tracking those works, you might find a uniting thread. This series is not a hard-boiled and brooding fantasy epic; The Witcher took care of that well enough. It's not lighthearted and fluffy, either. In October of last year, Miller illustrated Tom Wheeler's novel, Cursed. Wheeler's credits of The Cape, Empire, and Puss In Boots shines a much more telling light on what ended up on your streaming queue.

In short, the story is a revisioning of the legend of King Arthur, as told from the viewpoint of the Lady of the Lake. How did Arthur come to get the sword Excalibur? This tale explains it … kind of. Centering around Nimue, the source material serves more as a springboard than a retelling. Katherine Langford (13 Reasons Why, Knives Out) plays Nimue, the show's fae (fairy) protagonist, serving as an empowering heroine instead of a strange woman "lying in ponds distributing swords." She's backed up by Arthur, a mercenary with bard-like vocal abilities, played by Devon Terrell (who played a young Obama in 2016's Barry), and Pym, a fellow fae played by Lily Newmark (Solo, Pin Cushion). Then there's Wheeler's take on the wizard Merlin, played with drunken bravado by Gustaf Skarsgård (Vikings, Westworld), in a role and wardrobe that would put him at home at only the most debauched of music festivals.

Though running rampant with dark veins like the most twisting of tree roots, the show is bright and colorful. The gorgeous opening credits happily serve as animated transitions from one scene to another, filling the screen with beleaguering beauty. It also suffers from bad makeup, as showcased by Rugen the Leper King (Ólafur Darri Ólafsson) and Father Snake (Yan Shi) traveling with Nimue. This combination serves to give off much more of a Dr. Who vibe than a Game of Thrones one, and maybe that's the trick. At its heart, this is a young adult series, and while it capitalizes on the current fantasy trend, it just may find itself worthy of holding an audience, albeit a specific one.