by Ryan Smith
View ProfileTwitterRSS Feed
September 3, 2014 at 5:30 AM 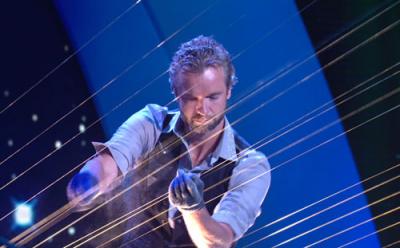 Invented by Close in 1999, the Earth Harp is the world's largest string instrument. It's a wild thing: Resting on a stage, with its strings attached to a balcony or other tall structure – turning theaters, festival grounds, and other venues into instruments in and of themselves, and, as Close's media reps write, "allowing audience members to look up as the music and architecture collide above them."

Don't just take their word for it, though.

"The Earth Harp is one of the five coolest things about Coachella," Rolling Stone wrote of it.

Close's Collective – a live accompaniment of dancers, aerialists, musicians and other artists – have played on (and of) scores of international stages with the Earth Harp, including ones at Burning Man and major structures around the U.S., in Hong Kong, India and elsewhere. They even placed third on NBC's "America's Got Talent" before entering the studio to record two albums in the last couple of years.

They tell us the Earth Harp is one of 100-plus instruments Close has invented, and a good few of the others will also be part of the massive musical installation.

The performance kicks off this autumn's events presented by the Mercyhurst Institute for Arts and Culture, and is sponsored by WICU TV. – Ryan Smith