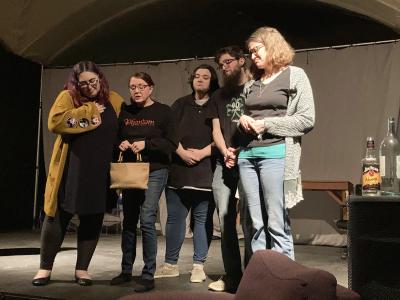 In a wholly original production, Dramashop presents 2022's Shorts Festival. Casting a net for local playwrights, both aspiring and established, the theater company put out a call for submissions. They narrowed the list down to eight finalists, all of which will be brought to life on stage for one weekend only.

The majority of the scenes are riotously funny, with some venturing into the wondrously heartfelt (Anna McJunkin's "Biffles"), to the somber and moving (Zach Flock's "A Conversation with a Friend"). Expect many a hilarious turn from the cast, from "Audition" (written by Michael Wachter and Benjamin Snyder) to "Sam and the KraKaren" (penned by Snyder, as part of a longer work in progress).

Other authors include Bre Womble ("The Kinda Okay Psychic"), Adam Rossi ("Grim Reaping"), Rebecca Styn and Margo Wolfe ("The Funeral"), and Char Newport ("The Making of a Cat Lady"). As one can surmise from just the titles alone, many scenes explore the darker side of humor, something that's no wonder considering the events of the last two years.