by Nick Warren
View ProfileTwitterInstagramRSS Feed
November 8, 2022 at 9:00 AM 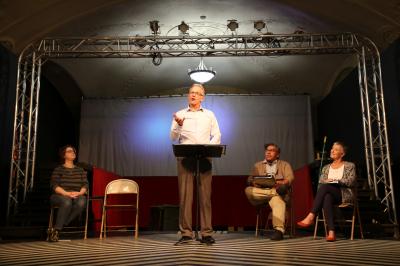 "Hell does not exist," Pope Francis was quoted in a March 2018 article with Italy's La Repubblica. "The disappearance of sinful souls exists." While the Vatican was quick to play damage control, explaining away what the infallible leader of their church reasoned, it raised the question to millions, nay billions of Christians — be they Catholic or Protestant — Jews, Muslims, and Agnostics the world over.

Rewind to 2014, as The Christians premieres at the 38th Humana Festival of New American Plays in Louisville, Ky. In the play, Pastor Paul drops a similar bomb to the congregation of his megachurch. The ripples are felt throughout the entirety of the script, affecting his life both professionally and personally. Pastor Paul — played by Steven Ropski — has built his church up from a congregation of 15 to one that numbers in the thousands. An affable and thoughtful pastor, he delivers a sermon one Sunday morning that drives a schism between his congregants — including his wife (Pam Perron), his protege, assistant pastor Joshua (Nick Warren), church elder Jayne (Sue Lechner), and congregant and choir member Jenny (Judy Stowe).

Hnath's scripts beg interpretation, and The Christians is far from exempt. Is it a play about the unraveling of white male fragility, or the literalism and semiotics of intra-church dogma? What stance does it take on the existence of hell, or does it even matter?

As part of Dramashop's Staged Readings series, the actors perform with assistance from a full choir made up of local singers. Both Friday performances will find Dramashop partnered with PopLuck Popcorn, with proceeds of its special "Fire and Brimstone" variety going to help the local theater.

With a 90-page script and no intermission, The Christians goes by fast. Members of the cast and crew (including director Michael Wachter and stage manager Justin Karns) will participate in an after-show discussion with coffee and refreshments provided (popcorn on Fridays).

So, for believers and atheists alike, it's a production that will make you wonder, make you question, and make you feel.