Eerie Roller Girls Speed Back Around 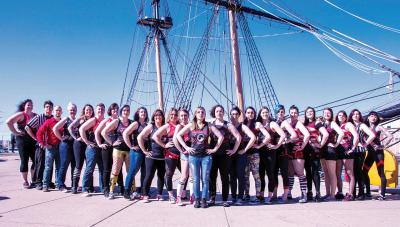 In 2016, things weren't looking so good for the Eerie Roller Girls. "We feared ERG might go to the great penalty box in the sky," confessed Sarah Mazzone, one of the team's coaches and original members. Erie's very own league of derby athletes saw their numbers whittled down to dangerous levels. "We had eight people in our league. You should roster at least 14 to play in a bout. That means with five people on the track most times, we only had three subs." They knew what they had to do: find new recruits. "Roller derby is highly dependent on recruiting skaters," said one of those new faces, Edith Dallenbach, a transfer from the Enchanted Mountains Roller Derby (EMRD) in Olean, New York. Their search for new members that year paid off in a big way. "We went from eight skaters to 30 skaters in one season. It was incredible," Mazzone said.

Saturday, July 7 will be the team's home opener at the Bayfront Convention Center. "We ended last season and began this season with away games, so we've left a big derby hole in a lot of our fans' hearts," said Kristin "Box Cutta" Kriegbaum (blocker and ERG Events and Fundraising Coordinator). "Luckily, we have three home bouts this year, so there are several opportunities for Erie to come out and see us get our jam on," she laughed, referencing the team's "jammer" role and the game's division of periods. With the season starting off more than five hours away in Richmond, Indiana on Cinco De Mayo, this bout is truly the kickoff for Erie's derby season. In addition to the 7th, home games will be held on August 4 and September 22, but this first one will be the one that fans old and new won't want to miss. ERG will face off against the ladies of the Pittsburgh East Roller Villains, whose home league is also co-ed. With the bad guys so clearly obvious, Erieites should already know who to root for. Kriegbaum even offered a personal guarantee, saying that "if they don't like it, I will give each and every one of them an enthusiastic high five by way of apology. And when they love it, they will get an even more enthusiastic high five and maybe even a sweaty hug," she laughed.

The new faces for 2018, lovingly referred to as "freshies," are injecting new life into an already heart-pumping sport. "The freshies and rookies are doing so well," Mazzone observed. "They are dedicated, play hard, and train harder." That training is a serious commitment. Dallenbach, an experienced skater who now helps run training and drills, notes that "training is a process. Learning the skills is dependent on the time our new skaters have." She continued, explaining that "it helps skaters and volunteers gain attributes such as confidence, self-control, determination, patience, perseverance and resilience." Having herself started the sport in her 30s, she reiterated that "anyone can do it regardless of age, but it takes a special breed to stick with it long term."

The Eerie Roller Girls are part of the Women's Flat Track Derby Association, the international governing body for the sport. For the uninitiated, the sport is fast paced and full-contact. The bout is made up of two 30-minute periods, wherein shorter "jams" take place. Each team has up to five players on the track. The team's "jammer" is generally one of their fastest skaters who scores the points (by lapping opposing teammates), and can be identified by the star on her helmet. The remainder of the team is made up of "blockers," who do just that, often shutting out the opposing team's jammer via pack skating or body checks. Additionally, one of these blockers can be a pivot (indicated by her helmet's stripe) who is able to switch from blocker to jammer. In addition to the skaters on the track and on the bench, there are coaches, referees, and announcers involved, all who volunteer for the love of the sport.

Even if you've never been to an actual bout, it's likely that you've seen the Eerie Roller Girls out at some community functions. "Erie Promotions has graciously invited us back to Comicon this September and you can look to see us hosting a celebrity bartending evening in the months to come," Kriegbaum said, speaking of the future. "We've also helped with the Letter Carriers Food Drive, the Presque Isle Clean Up, and in August, we will be back at Shriner's for their wheelchair basketball," she added. Mazzone elaborated, noting that in and of itself "Roller Derby is a commitment and a community. No matter who you are, your age, your athleticism, your profession, your political affiliations, or religious beliefs, if you commit to Roller Derby you will find your community."  — Nick Warren