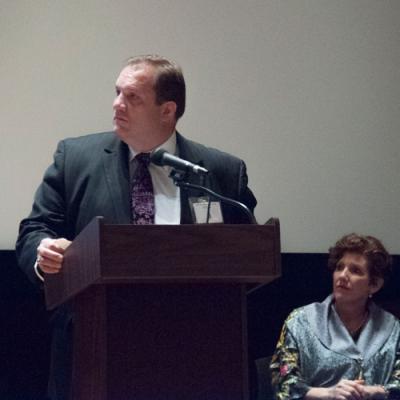 For the past three years, Destination Erie has worked with community leaders and local residents to draft a 25-year regional plan to address the social, economic, and environmental challenges we will face together in Northwestern Pa. On March 26, at the Raymond M. Blasco Memorial Library, the organization's final recommendations were officially unveiled.

If you're new to this process, here's the cheat-sheet version of what's happened so far:

Destination Erie is a public planning initiative created with federal funding from the department of Housing and Urban Development in 2012. The project began by identifying the assets and potential challenges within our community. In 2013, following a series of surveys and public workshops, Destination Erie composed a vision report to imagine what a prosperous local community might look like in 25 years. Once the best case scenario was envisioned, they also anticipated the negatives – economic challenges, public safety issues, and general barriers to prosperity.

In 2014, project groups were identified to isolate specific areas of focus – things like economic growth, community health, education, and job training. Next, recommendations based on these project groups were unveiled to the public. Local people were invited to respond to them during several public meetings, as well as through online questionnaires. Those suggestions were used to inform and improve the final plan, which has just been released.

After all that, Destination Erie was able to suggest seven strategic priorities deserving of our most urgent focus. They are as follows:

At this point, you're probably wondering what all of this means in practice. Let's start with the first recommendation. To help our citizens better prepare for high-demand careers, a partnership is in the works with the Pittsburgh-based Manchester Bidwell Corporation. Manchester Bidwell organizes free, 10-month job-training programs targeted at folks who aren't on the path to a college degree but are actively looking for sustainable long-term employment.

As is often the case with Destination Erie's recommendations, it's an idea that attempts to solve multiple problems at once. Manchester Bidwell begins by identifying the economic and cultural needs within the communities they serve. When they worked in San Francisco, they focused on the prosperous art and design sector. For a more local example, they recently helped establish the Brockway Center for Arts and Technology to provide practical skills that can be applied to the growing medical sector in central Pennsylvania. Once the growing employment opportunities have been identified, the job training is customized in response to them.

I spoke to Destination Erie's Project Coordinator Ben Pratt about the need for this kind of programming in our community. He quickly cited some interesting statistics about our job market. According to the Pennsylvania Department of Labor and Industry, there are about 6,800 unemployed people in Erie County. Though that may sound bad, there are also approximately 4,400 open positions available locally as well.

At a moment when college tuition costs are rapidly escalating, the Manchester Bidwell model could provide unskilled workers with a clear path to meaningful employment. Better still, some of our staffing issues might be addressed in the process, encouraging our local economy to operate more efficiently. Like most interesting ideas, this one requires money – about $150,000 in local investment. Fortunately, a coalition of local organizations (working in partnership with State Senator Sean Wiley) have already raised more than $82,000. Pratt believes that the total funding goals may be reached by the end of the spring.

Destination Erie's recommendations are organized through a series of "implementation matrices," which estimate costs, anticipate time frames, identify critical stakeholders, and suggest potential sources of revenue. Some recommended actions are broad and require additional planning ("identify or create an entity to oversee the preservation of open space") and some are precise and practical ("conduct a county-wide assessment of Internet coverage and capacity"). Looking them over, the array of acronyms and hypothetical planning initiatives can get exhausting. There are no silver bullets in the plan; no experts are expecting a single company or industry to remedy years of declining manufacturing labor.

But the small-scale improvements tend to add up after a while. Destination Erie's Project Manager, Anna Frantz, stresses the interconnectivity of the various proposals in the regional plan – their ability to "[increase] awareness that what benefits one community benefits us all." I asked her for an example, and she mentioned the need for improvements to our bus services.

When imagining a 25-year plan for a prosperous future, busing improvements are probably not the most inspiring thing to envision. But when you think of what those improvements make possible, they become more exciting. The Erie Metropolitan Transit Authority has a number of practical improvement initiatives in the works, such as an app to tell you when your bus is coming. According to Frantz, the goal is to be "more efficient about how they're providing service so they can be more reliable where they're most needed."

The need is the important issue here. If an organization wants to create an Adult Education Program and their potential students can't get to class without a car, that could mean many more potential workers without access to meaningful job skills. This problem becomes more urgent when applied to after school programs – think of how much crime could be prevented if young people had better access to safe extracurricular activities.

To oversee the plan's implementation, a partnership called Emerge 2040 was recently established. A steering committee has just been created to oversee the practical decision-making process. It will bring together leaders from the five principal organizations that found the original funding for the Destination Erie project, including County Executive Kathy Dahlkemper, Mayor Joseph Sinnott, Barbara Chaffee of the Erie Regional Chamber and Growth Partnership, and Dr. William Garvey of the Jefferson Educational Society. According to Frantz, who will continue on as Emerge 2040's project manager, the steering committee will work "to make sure that we look for groups that can be responsible for implementation, so that this doesn't just disappear from people's radars."

Destination Erie's regional vision isn't perfect. It's occasionally vague on concrete details, and there are certain systemic problems that aren't likely to be adequately addressed by it. Income inequality, for example. I worry that some of the bolder initiatives, such as our ability to develop and implement a Climate Action Plan, may get lost in a sea of committee meetings and PowerPoint proposals.

But as I dig into the details, deciphering each acronym identified as a "critical stakeholder," I'm reminded that democracy tends to move slowly. Sometimes that's because bureaucracy sucks the life out of innovative ideas, and sometimes that's because an awful lot of interested people have offered suggestions. In a city of about 100,000 people, about 3,500 concerned citizens participated in the process that lead to the regional vision. That's an encouraging number. Though meaningful change may not come as quickly as I'd like, I'm still confident that we're moving in the right direction.