An insincere, self-serving, and gleefully offensive set of songs from once great rapper 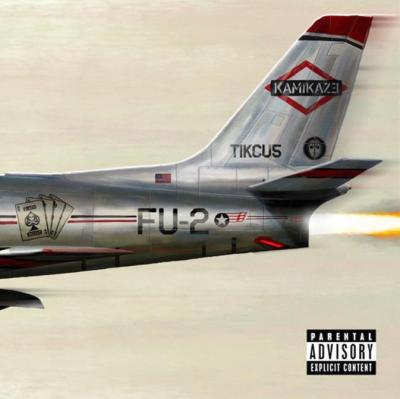 Revival, last year's mostly disposable attempt at a comeback, had one thing going for it: regardless of faceless pop features and ill-advised classic-rock samples, more often than not, it felt genuine, though it wasn't enough to save the album in the end. Marshall Mathers, the storied MC behind the moniker, could have handled the world's polarized response to Revival any number of ways, but as the kids say, this ain't it. Kamikaze is an insincere, self-serving, and gleefully offensive set of songs, in both the ways you'd expect and beyond. Fans may praise the rapper's technical ability (which has never truly come into question), but instead of using it to say something, anything at all, he spends half the album taking cheap shots at rappers more relevant than him (opening track "The Ringer") and the other half trying to rectify his old subject matter with new-school beats ("Good Guy"), culminating in the aforementioned single closing out the project. Kamikaze succeeds in meeting its implied purpose, not by taking down those around Eminem, but by tarnishing the rapper's own legacy while trying. — Aaron Mook

Alkaline Trio // Is This Thing Cursed

by Nick Warren9/12/2018, 10:45 AM
An addicting collection of 13 tracks
Album ReviewEminemKamikazeInterscope Records