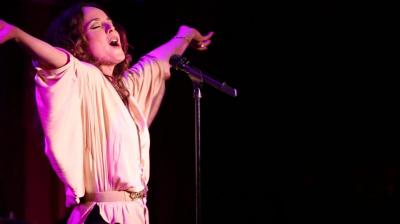 Following a wildly successful live stream during the fall of 2020, Broadway star and singer Melissa Errico will be "returning" to perform at Mercyhurst's Mary D'Angelo Performing Arts Center before embarking on a tour that starts in San Francisco and ends in London. If her name sounds familiar, it might not only be because of her widely publicized dramatic talents; the Tony Award-nominated actress is also an author and a regular contributor to The New York Times.

Accompanied by jazz pianist Tedd Firth, Errico will be presenting a night filled with classics from both the stage and screen — and considering her love for the great American songbook, attendees can look forward to hearing the star sing her way through a setlist filled with her "favorite things." In addition to a preview of her new album, Out of the Dark (composed entirely of songs inspired by films), Errico will be performing tunes written by the likes of Stephen Sondheim, Lerner & Loewe, Harold Arlen, Michel Legrand, Irving Berlin, Cole Porter, and more. These names should come as no surprise to fans, considering the singer released a full album of Sondheim numbers in 2018 titled Sondheim Sublime. Tickets for this performance come with complimentary pre-show tapas and drinks.