Erie's Kings Rook Club will be hosting one of this season's most eclectic and creatively satisfying shows. 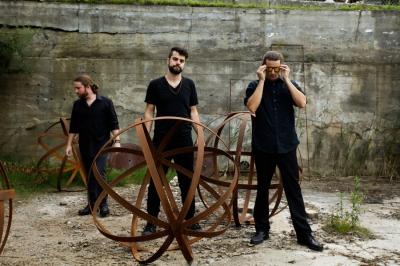 Lespecial will look to move the Kings Rook crowd with its genre-bending blend.

No stranger to unique bills, Erie's Kings Rook Club will be hosting one of this season's most eclectic and creatively satisfying shows. Pairing two bands with a history of mashing genres together, the venue's downstairs room will be the setting for a doubleheader featuring Connecticut-based Lespecial and Ithaca, New York's The Blind Spots.

Now split between Boston and New York, Lespecial is comprised of three childhood friends who each bring an essential component to the stage as well as the studio. The unparalleled sound they create is influenced by numerous genres, from post-rock to dubstep and even something called "death-funk."

"Injecting splashes of color and wicked chops into their heavy groove foundations or driving assaults, this dynamic battery simultaneously eases and propels Lespecial through the fractious changes of the band's mood and tempo," reads one introduction to the band.

Paired with Lespecial are The Blind Spots, a slightly more traditional outfit but one that refuses to be pigeonholed nonetheless. Combining folk influence with synth-driven rhythms, the band is led by dynamic vocals of singer Maddy Walsh. Walsh's comparisons run the gamut from Adele to Bonnie Raitt, as well as one most female vocalists are all too familiar with.

"I sound nothing like Janis [Joplin]!" Walsh proclaims in a press statement. "I think people see a female vocalist having that much fun commanding the stage and that's what they're forced to say. It's a giant compliment, of course, but it's a shame we don't have more rockin' ladies to look to. The tides are shifting, though."

As always, this popular venue offers an amalgamation of sounds, from the straightforward progressive-rock and Americana tags to the more ambitious "apocalyptic dub" and "moxie-rock" of this show's performers. Once again, Kings Rook Club has offered those 21 and up another shot at an unforgettable (and free) evening of music this April. — Aaron Mook

Lespecial and The Blind Spots