by Alex Bieler
View ProfileFacebookTwitterInstagramGoogle+RSS Feed
April 16, 2014 at 5:39 AM 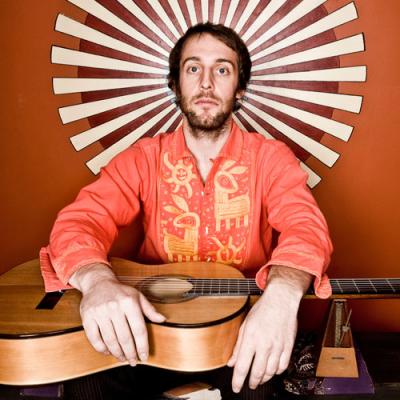 While some guitarists stick with power chords and simple hooks, there are those that use the instrument in new, less pop-radio-friendly ways. The guitar is quite a versatile beast, with six – and twelve-string specialists taming their musical monster to perform all sorts of sonic tricks, from droning layers of feedback bliss to melodic, meditative meanderings.

Basement Transmissions will welcome in a pair of these alternative guitarists, with Philadelphia-based musicians Eric Carbonara and Nick Millevoi coming to town for an installment in the electroFLUX experimental music series on Thursday, April 24.

"I never really thought of myself as a traditional guitarist," Carbonara said over the phone earlier this month. "I've just recently been learning theory and traditional aspects of the instrument, but the way I always approached it was more of a cathartic vehicle for self-expression and to tell stories about myself."

After years of dealing with mostly stripped-down, acoustic songs, Carbonara started experimenting with more electric instrumental pieces influenced by flamenco and classical Hindustani styles, the latter being a traditional form of playing found in North India. His fellow Philly guitarist, Nick Millevoi, however, ventures into rougher sonic terrain, dealing out intense batches of mesmerizing feedback and fuzzed-out guitar on a night that should explore plenty of musical ground.

"People should expect a huge dynamic range, from abrasively loud to as quiet as an electric guitar can get," Carbonara said. "I myself don't know what to expect, really. I like the trial-by-fire nature of when you feel confident in your playing but not necessarily 100 percent positive of how you want to do something, so it's kind of nice to put yourself into a situation where you have to figure it out."

Carbonara and Millevoi both embrace fretboard exploration, and there will be plenty of experimentation on the night, as the two guitarist will be joined by Wisconsin-based ambient artist Boyle, local artists Adam Holquist, Joseph Allen Popp, Alex Wilson, and Hossa Nova. The music may not be so simple, but it's an easy choice to check out a bunch of artists that thrive on providing something different from the norm. — Alex Bieler