Cirlce these dates on your calendar: Aug. 20 and 27 -- you now have lunch plans.

by Alex Bieler
View ProfileFacebookTwitterInstagramGoogle+RSS Feed
August 20, 2014 at 5:30 AM 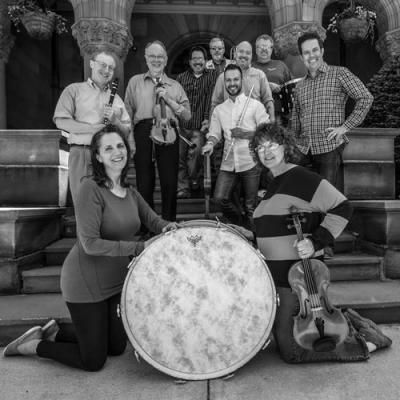 Typically, people working in Downtown Erie spend their lunch breaks chowing down delectable edibles at any of the numerous eateries situated on or around State Street. On Wednesdays, however, the Erie Art Museum offers up healthy servings of entertainment during the noon hour.

The Mid-Day Art Break gives people a chance to enjoy some music along with their lunch, either from the Art Museum's Wave Café or brought from elsewhere. On Wednesday, Aug. 20, sonic craftsman and Erie Reader 40 Under 40 alum Zack Orr will provide some musical thrills, playing songs from albums Francisco the Man and The Unstoppable Lift, in addition to whatever cover(s) Orr feels like treating us to.

A week later on Aug. 27, the Mid-Day Art Break will shift from the modern works of Zack Orr to the music of J.S. Zamecnik – known for silent film scores including that of Wings, the first-ever winner of Best Picture at the Academy Awards – from the early-to-mid 1900s during Sounds of the Silents. The Erie Chamber Orchestra will be the first to perform some of Zamecnik's pieces in decades after Executive Director Steve Weiser happened upon a box containing Zamecnik's work and used Kickstarter to fund the production of an album. After a successful performance at the Art Museum last year, the Erie Chamber Orchestra will return to treat Erie's lunch crowd to the sounds of Zamecnik.

"The outdoor reception – especially for this type of music – sort of blew everyone's mind," Weiser says.

"To have the audience as big as it was last year and to have these clearly identifiable movie scenes was fantastic, especially in an outdoor venue when you could be walking down State Street and hear what sounds like villain music."

Lunch breaks provide opportunities to fill more than just your stomach, so let your ears feast with Zack Orr and the Erie Chamber Orchestra during the Mid-Day Art Breaks this month. – Alex Bieler