Why Erie's Wabtec location remains a controversial point amid this crisis 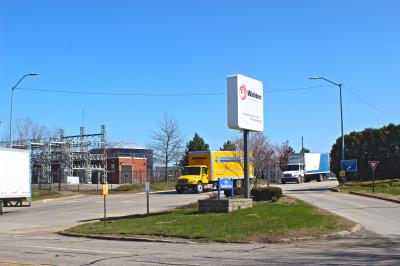 Nick Warren
Trucks exit the Franklin Avenue entrance to Wabtec on the morning of April 6, 2020.

Pennsylvania Gov. Tom Wolf closed all non-life sustaining businesses on March 19 in the best interest of "flattening the curve" – the now ubiquitous phrase used to illustrate a dearth of new COVID-19 cases. The hope from state and local officials was that closing businesses would make it easier for people to shelter in place, an order that spread county by county across the Commonwealth in late March and culminated with a statewide stay at home order on April 1.

In an effort to be business-friendly and to help sustain what's left of Pennsylvania's manufacturing GDP, the Governor's office allowed businesses to petition for an exemption to his order closing non-essential businesses provided that the work was "life-sustaining."

In Erie, several businesses applied for and received the exemption to continue "life-sustaining" work, including Wabtec, Erie's largest manufacturer. According to a copy of the company's exemption order obtained by the Erie Reader, Wabtec challenged the Commonwealth's designation of its work as non-life sustaining because the U.S. Department of Homeland Security (DHS) had on March 19 defined workers who manufacture "materials and products needed for...transportation" as "critical infrastructure workers."

Wabtec's request for exemption was granted by the Governor's office on March 23, provided that "in-person work at a business site is only to be performed on the most limited basis possible to deliver the services or goods of your life-sustaining business."

Since March 23, the company has operated at near capacity, with as many as 1,200 people working on three shifts per day in a 4.5 million square foot facility, according to the leadership of the United Electrical, Radio, and Machine Workers (UE) locals 506 and 618, which represents 1,600 employees at the Wabtec facility in Lawrence Park. While it considers the exemption good news because its members can continue to work, the union raised concerns about the health and welfare of its members, particularly because Wabtec's production hasn't been rooted in the DHS guidelines for the support of national infrastructure.

Prior to the company lobbying the governor for its exemption, the union was lobbying company management to "suspend operations at its Erie manufacturing facility and lay off its employees due to the unnecessary and unmitigated spread of the COVID-19 pandemic," according to a letter the union sent to the governor's office requesting Wolf to rescind Wabtec's exemption.

"We're not used to asking management to lay off our members," says Scott Slawson, president of UE 506. "We usually spend our time trying to keep people working."

But unprecedented times call for unprecedented measures. And once the exemption was granted by the governor, the union asked that the company maintain the spirit of the waiver by only engaging in "life-sustaining" production.

However, within a few days, neither the union nor its members viewed the work as "essential" under the definitions provided by DHS or the governor. They were not completing orders or doing work that contributed to the national transportation infrastructure. Instead, they were building locomotive kits that were headed to Egypt – an order that couldn't be delivered even if it was completed because of the global effect of COVID-19 on the international supply chain.

Since the people working in the factory were required by state and local officials to adhere to strict sanitation standards, including the use of materials in high demand by frontline medical personnel, the union asked the company to suspend work.

The union's message was echoed by Erie County Executive Kathy Dahlkemper, who issued her own letter of request to the governor on March 26 asking that he reconsider the full waiver of his order.

"I am concerned that the operational environment is not sufficient to protect the employees from the COVID-19 virus," Dahlkemper wrote. "Infection could quickly spread throughout the plant, affecting the health of the employees, their families, and ultimately our Erie County community."

What Dahlkemper described in her letter was a fear of what's known as "community spread."

Community spread didn't mean much to most of us a few weeks ago. Now it's as common as social distancing and strange looks from skeptics cautiously roaming the aisles of the grocery store. Let's face it, community spread is hard for many of us to conceptualize. We know, for instance, that small children can be germ magnets, and if you have small children you're likely to share the joys of unseasonal coughs and sniffles. But that's a poor illustration for the kind of community spread that's possible with COVID-19 because it treats the threat much too casually.

This is why the Center for Disease Control has offered as general guidance that people not gather in groups of 10 or more. In a group of 10, there are 90 possible connections between people in that group. Remember the formula, 10 x (10-1) = 90. If you increase the size of the group to 12, the possible connections between people grows to 132; and if the group has 20 people, the number of possible connections or interactions in that group balloons to 380.  With every person who enters a group, your chance of exposure to COVID-19 grows exponentially, and your chance of helping to spread it wildly is even greater.

It seems like an insane possibility, and under normal circumstances, it's worth ignoring. But statewide, the number of deaths more than doubled between March 31 and April 5 and the number of positive cases nearly tripled.

Erie County has been lucky, reporting just 20 positive cases since the arrival of COVID-19. But an outbreak at a major manufacturing facility could tip the scale for local health officials.

According to the "County COVID-19 Cases and Planning Report" prepared from data collected by ESRI, a geographic information systems company, and Johns Hopkins University, Erie County has just 1,040 staffed hospital beds and 40 intensive care unit beds at the ready.

If the outbreak were to scale to even a fraction of what's being experienced in the metropolitan area around New York City – where convention centers and churches are being used as makeshift medical centers, and refrigerator trucks have been pulled up outside hospitals to be used as temporary morgues – Erie would not be nearly as equipped for the task.

Right now you may be thinking that Erie is not New York City, and we don't have the population density or the other variables that made New York susceptible to its medical overload. You'd be correct to think so, but you'd also be wrong.

Erie has stemmed a major outbreak to date in part because county officials have been hyperactive in their attempts to slow the spread of this virus. County health officials called for Erieites to avoid non-essential activity when COVID-19 was only in southeast Pennsylvania. By the time it had reached Allegheny County, the county executive was asking the governor to issue an order for county residents to stay at home.

Avoiding the mass interaction that happens in a factory with more than 1,000 people is simply an extension of the plan.

When Gov. Wolf answered questions from the press about the business exemption process during a virtual press conference on March 30 he acknowledged that "from time to time, we have made mistakes."

That's okay. These are uncharted waters and mistakes will be made. But they should be made in favor of public health rather than a corporation's bottom line.

Not only does the full operation of the Wabtec facility present a public health threat to the community, but it presents a long-term threat to the emotional health of its employees who go to work shift after shift wondering if the protections put in place by the company are actually enough to keep them safe. Yet most of them decide to come to work each day because they are less afraid to die than they are to lose their job.

That's not a choice anyone should have to make. Yet it's the only one they have.

The company has, since the union and county executive issued letters to the governor, implemented several health-related measures, including checking the temperature of each employee reporting for work – even though we now know that people carrying the virus can be asymptomatic – and the establishment of "sanitation stations" throughout the factory. Those sanitation stations, as pictured by a local journalist on social media, were an upright wooden crate with paper towels and a box of plastic gloves set on the end. A makeshift trough held two bottles of sanitizing spray, similar to what you would find at your local gym, and a bottle of hand sanitizer.

But the question remains whether or not any measure would be enough to protect the health of the employees at a factory that large. And if the work being performed is essential in this time of crisis, what measures would need to be taken? If every employee were given a protective ventilator mask at the beginning of each shift, would it be worth risking a shortage of the same masks for frontline medical personnel?

Surely these are not the kinds of mistakes referenced by the governor because these seem so easily avoidable.

The health of Pennsylvania's economy post-COVID-19 will be tied to the health and welfare of its workforce during the crisis.

Protecting its workforce, like those at Wabtec, guarantees that Erie and the Commonwealth have a workforce healthy enough to restore our economy when the virus has passed.

Quite simply, it's life-sustaining.