Erie At Large: In Trump's America

In Trump's America, the rubes win. Not literally, of course, but they'll believe they have won, and that is much, much worse. 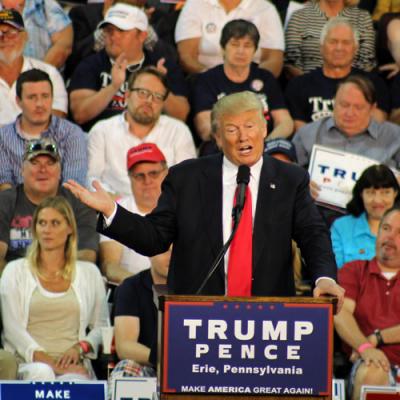 In Trump's America, the rubes win. Not literally, of course, but they'll believe they have won, and that is much, much worse.

This was the takeaway as I sat, corralled inside the designated media zone – the DMZ, if you will – at Erie Insurance Arena last week, cordoned off for my own safety, alongside members of the local and national media.

Were we there to observe? Or were we the show?

One may never know.

I sat two rows behind CNN and FOX News – the Yin and Yang of the conservative assault on "mainstream media" – as producers for these networks bantered jokingly while Trump maligned the "liberal" CNN and begrudgingly praised the "conservative" Fox News.

The mere mention of the media evoked vitriol from the audience of more than 7,000 people. Only a celebrity death match between Fox's John Roberts and CNN's Jeremy Diamond would have brought them more pleasure. With every Trumpish digression directed at the media, a young man – barely, if at all, old enough to vote – holding a Trump sign and ironically wearing an "Affliction" t-shirt would turn, look into the media gallery, and yell. No words, just noise.

A woman seated behind the media gallery silently held up a hand towel with the words "Stop Hate" written in marker upon it. She did not stand. She did not speak. As soon as those around her realized her pennant was not for their team, they moved in around her and began to point and shout, "Trump! Trump! Trump!" as they had been instructed to do by the pre-recorded message that served as a prelude to the rally.

A Pennsylvania State Police officer descended the stairs toward the woman, where he eventually initiated her escort out of the building. But before he arrived, someone had climbed over the seat behind her, snatched the towel from her hand, and thrown it into the empty seats below.

Were those in the audience the victim or are they complicit in the crime?

Only time will tell.

Outside of the arena, vendors lined French Street. I spoke to a man named John from South Carolina who sold "Make America Great Again" hats as well as Trump tees and campaign buttons. John had the appearance of someone most of you would probably steer away from if he approached you at CelebrateErie. He was dressed in a stained green t-shirt, a baseball hat, and a fanny pack. We had a chat near the entrance to the alley between the PNC Bank parking garage and the back of the Verizon building while he finished a cigarette.

Like a modern day "Okie" in search of work, he follows the Trump campaign from town to town, peddling election year tchotchkes. How long will he stay on the road, I asked, before he returns home?

Has he just joined the traveling show, I wondered?

"No," he replied. He's been campaigning since last November. A year on the road, side by side with the Trump campaign, relying on Trump for a wage, but each day being paid by someone else.

John and I had talked on my way into the Thunderdome, when the streets were relatively quiet, with the exception of the passing "Trump Train" – a construction tanker painted flat black with the "Trump Train" moniker on its side – and the honking car horns in support of the attendees lined up along French Street waiting for admission to the arena or the occasional sound of "F@8k Trump" bending from the open windows of passing cars. The crowd was too intent on entering the rally to worry about purchasing evidence of their commitment to the name-brand candidate.

After the rally, it was a different scene. The exodus of disaffected Pennsylvanians, Ohioans, and New Yorkers fed the shakedown in the same way that concertgoers are compelled to purchase merchandise as a declaration of their love for the performing artist.

Amid the fragmented and ahistorical speeches of the rally, the fearful eyes of a disgruntled populace stared at, listened to, and celebrated a demagogue who will say anything to anyone at anytime, and if he showed up tomorrow and contradicted himself, they would not care.

I needed a drink to wash out of my mouth the odd taste of all I had consumed. The crowd at the bar was unusually heavy, comprised of those wanting a drink and those wanting to binge drink. A man, who proudly proclaimed he had just come from the rally, offered to buy my tie for a dollar so he could use it to strangle someone – presumably someone who had not attended the rally. I counter-offered my tie for $20. He declined in disappointment, but was quickly propped up by his special lady friend who assured him that he would be able to find an equally nice tie at the dollar store.

This is capitalism in the age of Trump.

Amid the fragmented and ahistorical speeches of the rally, the fearful eyes of a disgruntled populace stared at, listened to, and celebrated a demagogue who will say anything to anyone at anytime, and if he showed up tomorrow and contradicted himself, they would not care.

In that, I now understand what Thomas Jefferson felt when he wrote, "I tremble for my country when I reflect that God is just."