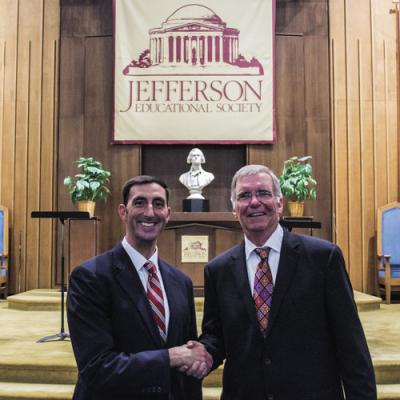 Many have said that this year's mayoral election is the most important city election in a generation. After decades of managed decline, the effects of urban sprawl and deindustrialization have placed Erie at a crossroads. Down one path waits a potential prosperity born out of a millennial renaissance. Down the other are the vestiges of time gone by, changes never made, and chances never taken.

Amid this urgency, city voters have an actual choice to make. The Republican party has posted its first viable contender in decades and the streets are talking. Republican John Persinger's campaign is promoting itself as being locked in a horse race with Democrat Joe Schember, who, by historical precedent and voter registration, should be a shoo-in for the job.

The New York Post helped perpetuate the Persinger narrative a few weeks ago with a story that made the Republican out to be a candidate that Erie should be lucky to have. It was written by Salena Zeto, who has written for The Weekly Standard, is a board member of the Center for Media and Public Policy at the Heritage Foundation, and has worked for the campaigns of George H.W. Bush, George W. Bush, and Rick Santorum, among others, according to her author bio on The Atlantic's website. Nevertheless, the stereotypically negative view of Erie that Zeto used to frame this election cycle might have cost Persinger as many votes as it earned him.

John Persinger appears to be the candidate of ideas for many in the electorate who are hungry for action and innovation after more than a decade of steady-as-she-goes stewardship from the Sinnott administration. He has promoted mobile apps that city residents could use to make and track complaints related to blight and city services, he's outlined changes his administration would make to the City of Erie website — a throwback to the days of dial-up — and he's been a zealous advocate for addressing the city's problem with blighted and abandoned homes, outlining a plan to raze 1,000 problematic properties in 1,000 days.

At the Jefferson Educational Society mayoral debate on October 17, Persinger had difficulty reconciling exactly how he would pay for his housing plan given that most of the sources he has identified to fund the project are currently allocated for other initiatives, including the city's neighborhood community centers, which are the last line of defense in some of Erie's most troubled sectors and central to the stability and revitalization of transitional neighborhoods as outlined in Erie's comprehensive plan.

But contradictions like these are common for even the brightest neophyte political candidates and we've witnessed both candidates — even the more seasoned 66-year old Democrat — make the same mistakes.

But these are the problems of the campaign. It is difficult to say all things for all people with sincerity.

Of significantly greater concern is whether either candidate will take sincere action once he is sworn into office in January 2018. On this question, voters have reason to be concerned. John Persinger may be ideologically predisposed to disruption. Erie needs a disruption, but it doesn't need to cull destruction in the process. For progressive Democrats throughout the city, Persinger's pride in his Republican credentials are cause for concern because of what's happening on the national stage. One politically engaged Democrat summarized on Facebook the concern of many voters, particularly young voters and those in marginalized communities.

"You seem to have some good ideas for the city," he wrote. "But you are a Republican and the current face of the Republican Party is Donald Trump...Why should Erie — a city of women, a city of people of color, a city of LGBQT people, a city of refugees and immigrants — vote for a Republican mayor in this era of Trump?"

The candidate's usual response to such a question is that he's "in this for Erie" and that he's not concerned with what's happening "out there." A better answer would have been that in a Democratic city where the Democratic candidate is elected by a minor plurality of votes in the May primary, running as a Republican ensured his invitation to the big dance in November.

Whatever the answer, Persinger's relative youth and idealism — conservative, libertarian, or otherwise — may simply not be enough to rally young voters to the poll. And that's exactly what he'll need to do to win on November 7.

In the mayoral primary in May, only nine — that's correct, nine — 18 year-olds voted. Voters under the age of 30 accounted for just 7 percent of voter turnout across parties. Moreover, John Persinger will need to overcome the significant lead that Joe Schember can expect to begin with on November 7.

During the last municipal election cycle in 2013, more than 3,100 registered Democrats pushed the party button and voted straight ticket. Only 652 Republican super voters did the same. Voter turnout was 32 percent.

For Joe Schember, it is not the state of the national party with which he must wrestle. Rather, the legacy of local Democratic control is his cross to bear.

Just as John Persinger has not adequately dissociated himself from the party of Trump, Joe Schember has yet to articulate how his Democratic administration would be different from administrations past.

Just as John Persinger has not adequately dissociated himself from the party of Trump, Joe Schember has yet to articulate how his Democratic administration would be different from administrations past. The city is in desperate need of a change in the way it does business, yet the Democratic candidate for mayor is surrounded and supported by the very people who have administered no significant change in the 21st century.

When Persinger spoke fast and loose on October 17 about demolishing blighted properties, Schember replied that he, too, wants to address blight, but he will take on that issue as it is appropriate to do so. Exchanges like this ring a little too loudly of the current administration's deference to "core competencies," which is shorthand for doing nothing you don't have to do, even well after it should have been done.

Schember self-identifies as a fiscal conservative, which is fine as long as that instinct is counterbalanced by the leadership and creativity to do more with less. His candidacy has not, to date, demonstrated such complexity.

Both men say there needs to be a change of culture in City Hall. Years of nepotism and favoritism have left us with a city in which parking meters are still fed with change and parking fines are still paid by check. Consider it a metaphor for all of municipal government. Neither candidate has identified how change might come outside of blanket declarations of reorganization and the addition of few new layers to the bureaucracy.

Knowing how City Hall works is one thing. Knowing how to change it is more complex.

A recent CityLab article described how Seattle was able to increase bus ridership at the same time those services are in the decline in major metros across the United States. The method to increase ridership in Seattle can be generalized into three steps each of which are instructive for government of any size: 1) commitment, 2) clarity, and 3) strategic action.

Seattle committed to buses and busing as its priority. When it encountered a funding gap between its priorities and its financial realities, city officials explained in extensive detail what they needed to do to close the funding gap and the people of Seattle voted for additional taxation to close that gap. And when Seattle encountered transportation problems, it took strategic action to mitigate the root causes of those problems rather than spending money on triage that would be costly and recurring.

Erie has its comprehensive plan, the strategic actions that must be taken to direct us on a course toward prosperity and sustainability. But, Erie is short on commitment and clarity, and our next mayor — whoever that may be — has yet to make a decisive declaration for the future.

So vote your conscience. The mayor's race in 2021 might be the most important election in a generation.