As extremism escalates, balancing state legislature of the essence 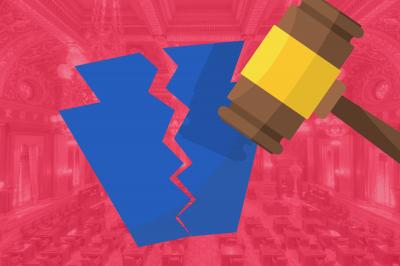 Nick Warren/ErieReader
Independent State Legislature Theory dictates that state courts do not have the power to overturn election policy set by the legislature. If enacted, one of the important checks and balances in the Keystone State (and others) would be effectively broken.

If you're not familiar with something called the Independent State Legislature Theory, it's time to get acquainted.

That's because the U.S. Supreme Court is poised to hear an argument from the state of North Carolina that, if affirmed by the Court, could make it easier for the Republican seditionists in the Pennsylvania General Assembly to carry out their insidious plan to overthrow elections that don't go their way.

The Independent State Legislature Theory, in its most simple form, dictates that a state court — like the Pennsylvania Supreme Court — doesn't have the power to overturn election policy set by the legislature. According to the doctrine, that power would be reserved only for the federal courts.

Legal scholars generally concur that the use of the term "Legislature" by the founding fathers, referred to a state's general lawmaking process, not the lawmaking body.

The U.S. Supreme Court agreed with this distinction as recently as 2015 when it ruled against the Arizona legislature and affirmed that Arizona's independent redistricting commission had the power to draw congressional and legislative maps.

But later this year, the Supreme Court will hear oral arguments related to a congressional and legislative redistricting challenge in North Carolina. Voters there sued the state legislature because, they argued, lawmakers created a partisan gerrymander that unfairly favored Republican candidates. The state supreme court agreed and ordered a lower court to oversee redrawing of the legislative maps. North Carolina legislators appealed to the U.S. Supreme Court based on the independent state legislature argument, and the Court agreed to hear the case.

Justices Samuel Alito, Clarence Thomas, and Neil Gorsuch have signaled their support for this doctrine in previous decisions, making necessary just two of the three remaining conservative justices to join them in creating an electoral authority within the states with no effective checks and balances.

As you might imagine, that raises questions even bigger, and more consequential, than gerrymandering.

Let's say, for example, that a state legislature wanted to reject the outcome of a presidential election and submit its own slate of electors. (That would never happen, right?) State courts, which are essentially tasked with ensuring that state laws — including election laws — don't violate state or federal constitutions, would not be able to intervene. Any objection would be pushed to the federal courts where the justices would have to decide if the legislatures had the power to create an otherwise unconstitutional election practice.

If the conservative majority on the Supreme Court sides with North Carolina lawmakers, that's exactly the legal precedent they will have established.

Most respectable legal scholars reject this theory outright because what good could come from a group of elected officials being granted the right to violate the state constitution when it comes to the administration and outcome of federal elections — like a presidential election? But that's precisely what our Republican state legislators here in Pennsylvania would like to do.

It was the impetus behind the amicus, or "friend of the Court," brief signed by Senator Dan Laughlin and 24 of his cronies in the 2020 Supreme Court case, Texas v. Pennsylvania. They argued that only the legislature — not the governor or secretary of state — has the power to set election policy.

It's the latest step on a slippery slope that would allow the Republican-controlled legislature to issue an "alternative" slate of electors to Congress the next time their candidate doesn't win the presidential election.

The only remedy for the overreach of an "independent legislature" is a balanced General Assembly, and the legislative redistricting approved earlier this year brings us closer than we've been in decades.

Republicans currently occupy 113 of 203 seats in the Pennsylvania House of Representatives, according to Ballotpedia.

While the new maps still favor Republican control of the legislature, the Princeton Gerrymandering Project, in an analysis for the Philadelphia Inquirer, estimated that 101 House districts now lean-Democratic.

If the Princeton Gerrymandering Project math holds, Republicans would have a one member advantage in the House.

Redistricting in Erie County created one heavily Democratic district in the city of Erie (HD-1), two swing districts (HD-2 and HD-3), and one sprawling, heavily Republican district (HD-4). All but the fourth house district are currently held by incumbent Democrats who are expected to win re-election in November.

Despite the Republican advantage in HD-4 — it's 49.5 percent Republican, 36.5 percent Democrat, and 14 percent Other — this district represents an opportunity for Democrats to pick up an additional seat in the legislature, with the potential for shifting control of the House if they do. As important, if not more so, the race for HD-4 also represents an opportunity to stop another extremist Republican candidate from being seated in the Pennsylvania legislature.

The Democratic candidate is a 33-year-old woman from Corry whose long list of civic accomplishments include being named the volunteer of the year by the Corry Chamber of Commerce and founding the Corry Young Professionals (she was also named to this year's class of Erie's 40 Under 40).

Chelsea Oliver's candidacy is forward-facing, like her experience. She helped design Corry's strategic plan and served as an appointed member of the Corry City Council from August 2020 through December 2021, when she was the city's director of parks and public properties.

She's an ideal candidate in an unsure time.

Her opponent, on the other hand, is a retired mercenary and aging blues musician who built a political following by perpetuating the Big Lie and denying the reality of the COVID-19 pandemic on social media.

It's a sad story, really. Jake Banta was a Navy Seal and later a military contractor, who could've cut his political teeth in either or any political party with those credentials alone. Then, he built a loyal musical following throughout the region, with his band, playing local bars and music festivals. How Americana.

But since Trump took office in 2016, and subsequently lost the election in 2020, Banta's rhetoric has grown increasingly more extreme, embracing the two plus two equals eight logic of QAnon conspirators.

His greatest hits include stream-of-consciousness rants against COVID vaccines, calls for people to remove their children from schools to protect them from the injustice of masking, and telling his followers to pull their money from the banks because Facebook "hacked billions of accounts."

He once claimed that "COVID was invented and patented in America and released in Wuhan tactically" and surmised "after reading months of research" that "[Bill] Gates funded it, [Anthony] Fauci patented it with China, and sent it to Wuhan to be released."

It didn't take long for the global pandemic to become the scapegoat for the outcomes of the 2020 election.

"The PLAN was to release the virus and implement mail in ballots," he declared. "THAT is why WE SAW Greg Hayes win his election in traditional voting at the polls, yet later on lose when the 'mail in ballots' were counted." The emphasis is from the original posts.

It's this kind of bastardized logic and arithmetic, perpetuated by millions of self-proclaimed patriots, that led thousands of insurrectionists to storm the U.S. Capitol on Jan. 6, 2021 in an effort to stop the certification of the 2020 election.

"I don't feel a bit of remorse for Patriots showing up in DC," Banta wrote in a Jan. 11, 2021 Facebook post. "It was a response to aggression on our nation and a stolen election. WE WILL NOT STAND FOR IT."

Banta, with little regard for the military veterans who served as Capitol and D.C. police that day, justifies the assault as a necessary result of Trump's loss in the 2020 election, and he punctuates most of his posts with the phrase, "I AM AMERICA."

I assure you, he is not.

Erie County is often viewed as a bellwether for politics in Pennsylvania. Its voters are, indeed, divided, but historically pragmatic, voting Democratic at the local level while often splitting their regional and statewide tickets.

But the stakes have become too great to sit idly by as once perceived moderate Republicans embrace extremists at all levels of our local and state government.

Ridge Republicans, who once supported candidates like former Governor Tom Ridge and retired State Senator Jane Earl, should find it increasingly more difficult to vote for the unconscionable and, increasingly, seditious tendencies of their party and its candidates.

The voters of Erie County have an opportunity this year to protect and defend both the Commonwealth and the Constitution.

It is, perhaps, a fleeting opportunity to remind America what patriotism looks like in the cradle of American democracy.