The Erie Bayhawks and the New Mexico Thunderbirds met again on Saturday, Feb. 12 for the second game of the three-game series at Tullio Arena. 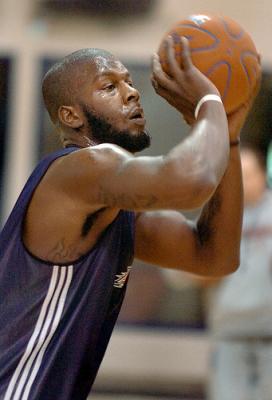 The Erie Bayhawks and the New Mexico Thunderbirds met again on Saturday, Feb. 12 for the second game of the three-game series at Tullio Arena.

Ivan Johnson dominated once again scoring a game-high of 29 points and pulling down 12 rebounds.  His efforts inside lead the BayHawks to a 123-105 victory, the teams second straight over the Thunderbirds.

Former LSU standout, Tasmin Mitchell came off the bench and contributed 28 points. Mitchell and Johnson were both hot and worked extremely well in the paint together. In addition to sustaining powerful inside presences, they worked hard to include themselves in the fast break often finishing off assists from point guard Blake Ahearn, who also added 19 points to the winning effort.

Unlike the first game, the two teams battled closely for the lead throughout the first three quarters.  The Bayhawks started to pull away in the fourth quarter as a result of cooperative bench play.  Derek Raivio added 14 points and hit many key shots down the stretch.

The Thunderbirds scoring efforts were lead by Jamine Peterson, who contributed 22 points.

The Bayhawks improved to (22-9) and extended their win streak to seven games. The Bayhawks are displaying team chemistry and high-level performance heading into the All-Star break.