The answers to the questions you've all been waiting for. 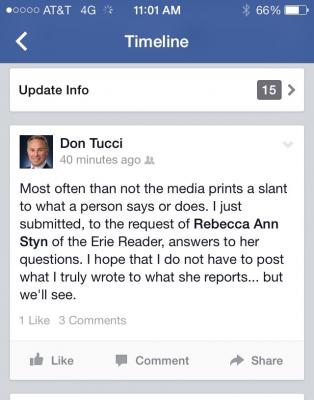 If you were active on Erie social media around 10:30 a.m. Friday, Oct. 25 you know the story. In case you missed it, here's a brief recap of what happened:

"Most often than not the media prints a slant to what a person says or does. I just submitted, to the request of Rebecca Ann Styn of the Erie Reader, answers to her questions. I hope that I do not have to post what I truly wrote to what she reports… but we'll see."

What Tucci stated was accurate -- in the sense that he had just submitted answers to writer and contributor to the Erie Reader, Rebecca Styn, whom he tagged in that post.

But what Tucci stated wasn't accurate -- in the sense that what was to be printed were going to be his verbatim responses to said questions; you know, in a Question-And-Answer format -- much like the one we ran in our Oct. 16 issue, which featured Democratic Erie County Executive candidate Kathy Dahlkemper.

After a bevy of responses to the post, shares, and social media cross-pollenation to Twitter, Tucci removed the post. But, as is generally the case with all things added to the Internets, simply pressing "Delete" did not make this go away, as several people took screenshots of Tucci's post and shared them with the Reader.

So back up went the post. And again, onward went the comments -- this time additionally focused on Tucci's attempt to remove his comments from plain sight.

All of this is explained in further detail in the From The Editors in the Oct. 30 issue, as well as our reasoning behind our decision not to publish Tucci's Q&A as originally planned. But in the sake of transparency, below are the questions and answers -- unedited -- in the form in which they were submitted to Rebecca Styn and received to her editor:

"Rebecca Styn: If elected, what are your top priorities once in office?

Don Tucci: The 911 call center is and should be one of the first issues that any Country Executive needs to address. I have been visiting throughout this county and talked with many of the first responders and they want to see a positive change. The role of government is to protect the people and that is what needs to be done. B. Pleasant Ridge Manor is another priority that has to be addressed. These are our citizens that need help in the most often dire situations. Other nursing homes can actually be profitable and yet we continue to lose money year after year. As in most businesses, management has to be accountable and that will be a requirement. Upon the new administration. A full analysis by the various department supervisors and their assessment is necessary at his point. C. A major part of my plans are to promote Erie County. That will be my focus. We have waterways, railways, major highways and an expanded airport ideally situated 100 miles from three major cities. We should be a business logistic and tourist hub. I have yet to see one billboard on I-90 or I-79 promoting Erie County and all that it has to offer other than individual businesses.

RS: Barry Grossman said he may be willing to endorse if either of you should you favor the establishment of a community college, and retain some of his staff. Thoughts on this?

DT: I respect and understand what Barry Grossman has done for Erie County…he is fair and balanced in his thought process and provides public input but my views on the alternative to a Community College will not be influenced for an endorsement. The public has a right to know how we are spending their tax dollars and I will give all personnel consideration in their positions due to the fact that they have accumulated knowledge. Since I am a businessman, I shall evaluate the effectiveness and efficiency of each associate of every department for retention in my administration. I will give full consideration to the immediate staff and retain those individuals who have both positive and constructive recommendations and skills to move forward with the new administration.

RS: Tell me one idea you'd like to see happen that would positively affect the younger constituents of Erie county.

DT: My concentration is and has been soliciting businesses to come to Erie County and that will continue to be a commitment. Working with the learning institutions and businesses to create a mentoring/internship/scholarship program could be an effective alternative to the community college idea. We must create the environment by having the younger generations participate in their government by providing the opportunity through collaboration. We can simply ask them for their input together with that of the academia and private partners.

RS: If elected, what are your top three priorities once in office?

DT: The 911 call center is and should be one of the first issues that any Country Executive needs to address. I have been visiting throughout this county and talked with many of the first responders and they want to see a positive change. The role of government is to protect the people and that is what needs to be done. B. Pleasant Ridge Manor is another priority that has to be addressed. These are our citizens that need help in the most often dire situations. Other nursing homes can actually be profitable and yet we continue to lose money year after year. As in most businesses, management has to be accountable and that will be a requirement. Upon the new administration. A full analysis by the various department supervisors and their assessment is necessary at his point.

RS: The taxpayer-subsidized hotel – do you support it?

DT: I do not think we should be subsidizing a hotel. This is not part of the responsibilities of neither government nor the elected officials.

RS:  Of the entire county, what areas do you think need the most improvement? Why?

DT: In my opinion, the employment opportunities and developing an educated workforce are most important and what I have outlined above, of private-public cooperation in developing both will help toward those goals.

RS:  The mayor is entering -- unopposed -- his final four-year term. How strong is the relationship between the county exec's office and the mayor's office now, and what sort of relationship do you plan to have and how can you ensure that?

DT: I haven't had the opportunity to meet the mayor formally. He and I would need to work together no matter our differences. The City is a major factor of the County but there has to be full analysis and assessment as to both short and long-term plans. I have not been provided the future planning so I am limited as to what the city officials have suggested in the near future. Wise management of taxpayer's dollars through fiscal responsibility is what I am about and I would hope that we can come to amicable relations. I know that he is responsible for the city but I have to be accountable to all the citizens of Erie County.

RS: We're poor. A lot of us. Bigger businesses are either leaving (GE) or aligning with outside corporations (UMPC Hamot), while at the same time, new business growth isn't booming. How do you plan to address that?

DT: The definition of poor can mean many things - because my observations is a lack of employment is an issue that needs to be addressed by both private and public entities, but what I think we are poor in is attitude of the people feeling defeated and not focusing on our qualities. Personal pride reflects positive energy that transfers into positive image. Those that do not have pride in their communities are just going to continue to decline. It is not up to the government to provide the ideal setting; it is up to the people.

RS: Erie's population hasnt grown in quite some time. Do you think this is because Erie's the perfect size, or because there's nothing here forcing people out or attracting them in?

DT: It is a combination of all the above statements. We need a Leader who has the vision, skills, and tenacity to transform Erie County and I am that person.

RS:  What do you think the hallmarks of the last county executive have been? And why do you think Erie indicated it was time for a change through the voting.

DT: I am very supportive of Mr. Grossman's initiative of term limits which he was successful to place on the November ballot. I obtained signatures on the petition of approximately 1000 signatures myself. Keeping the budget without raising taxes is a major plus."