No new cases reported, while Dept. of Health's Charlotte Berringer joins the conversation

by Nick Warren
View ProfileTwitterInstagramRSS Feed
May 5, 2020 at 4:14 PM 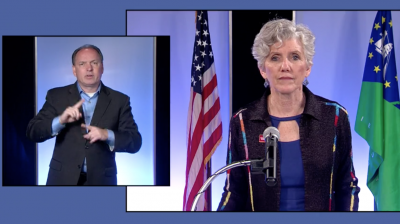 In her daily address, Erie County Executive Kathy Dahlkemper was pleased to report that there were no new cases of COVID-19. The county's total remaining at 93 positives with 2,290 negatives. So far, there have been 75 recovered cases, for a total of 18 active cases. There have been two deaths of Erie County residents due to COVID-19.

Chautauqua County remains at 37 cases and four deaths. Ashtabula County now has 149 cases (up three) and 16 deaths (up one).

Statewide, there were 865 additional positive cases, for a total of 50,957 total cases. So far, there have been 3,012 deaths statewide, and 199,925 patients who have tested negative to date.

Following a release of details concerning Yellow phase restrictions, local government has replied with a series of questions to further clarify what will and will not be opened.

Charlotte Berringer, director of community health services at Erie County Department of Health, joined Dahlkemper via Zoom. Berringer began by discussing COVID-19's differences and similarities to the flu. She noted that both are respiratory illnesses that spread from person to person. They both have similar symptoms, and can range mild cases to fatal ones. She noted that both can result in pneumonia and both can be spread two days before symptoms show.

As for the differences, it was cited that the flu is spread from one person to approximately 1.3 people, while COVID-19 spreads to two or three people. Symptoms for the flu manifest themselves much faster as well, with COVID-19's may show up gradually. Berringer also cited CDC figures, explaining that there have been nearly four times the amount of cases of COVID-19 (1.2 million) in the last two months compared to the entire nine-month flu season last year (310,000).

The biggest difference, she noted, was the number of deaths. The CDC estimates that between 24,000 and 62,000 die each year due to the flu, with 34,200 flu-related deaths occurring in the last flu season. At the time of this writing, over 71,000 deaths have been attributed to COVID-19 in the US.

Berringer also discussed the difference between the wording of "isolation" and "quarantine." She explained that in the healthcare community, "isolation" refers to when someone who has tested positive for a disease (in this case, COVID-19) confines themselves to a specific location. If they share a house with other individuals, this should ideally be a separate room with its own bathroom. Isolation should be done essentially until their body heals and the disease's symptoms subside.

"Quarantine" is something that people should do who have been exposed to someone with the disease. This process should be approximately 14 days. So, "isolation" implies a diagnosis, while "quarantine" is a necessary precaution.

"When someone has symptoms and they choose to get a test, at the point that they get the test they are instructed to quarantine while they're waiting for the test results," Berringer explained. If they receive a positive result, then they are issued isolation directives.

When asked about the increased socialization in the wake of eased Yellow phase restrictions, Berringer quickly admitted that "we would not at all be surprised if we saw a doubling or tripling of our numbers."