The long-running LGBT+ publication looks back 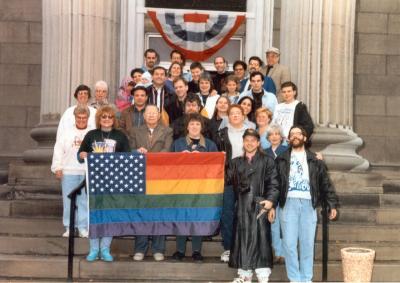 Erie Gay News
The Erie Gay News originated as a double-sided sheet of paper in the spring of 1992. Three hundred issues later, it is still going strong and providing Erie a needed voice. Pictured here are members and supporters of Erie's LGBT+ community on Oct. 28, 1995, along with EGN Editor Michael Mahler (front row to the very right).

On Tuesday, Oct. 20, The Erie Gay News released its tricentennial issue. That milestone was reached month by month in print, and in case you haven't already done the math in your head, that's 25 years. For the record, it's actually been around 28 years. With in-depth community news and an extensive community calendar, it's been a fixture of the Erie community since the early 1990s.

Back when it started though, things were very different.

EGN Editor Michael Mahler, 57, came out publicly in May of 1992 and was one of the first openly gay voices in Erie County. "It was a lot more common for people not to be out," Mahler recalled, able to count on one hand any local people he knew who were openly gay or lesbian. "It used to be the case that when we got started that folks weren't necessarily as comfortable listing contact information online," said Mahler. "So there was a point where I [reasoned that] since I'm already out, I don't care. I will kind of be a buffer for you guys."

"So I mean that's changed."

For Mahler, EGN wasn't his first foray into the world of print publications. A software developer by trade, he created a regular newsletter for a comic book club he was part of in college — while the golden age of zine culture was in its heyday. A few years later, he helped do the same thing for the regional arm of The Society for Creative Anachronism, the world-famous medieval recreationists. The Erie Gay News evolved out of the Erie Gay Community Newsletter, which was produced by the organization Bridges, beginning as a double-sided sheet of paper in the spring of 1992. By January of 1993, it had moved to the 12-page format that they still use in 2020 (though over the years, they've regularly gone with 16 and 20-page runs as well). Even in those early days, you could read Mahler's long-running column, "Michael Dithers."

In August 1997, the issue masthead debuted with the logo and title they still use today: Erie Gay News. In the early 2000s they ran several issues as P.R.I.D.E. — standing for "Positively Representing Identities of Diversity In Erie," with EGN returning in December of 2002 onward.

It's easy to see the history of EGN for one simple reason: They've kept their website meticulously updated. Not only is each issue viewable as a PDF, but there is an extensive local history regarding Erie's LGBT+ community reaching back to the 1960s. The EGN is also cataloged in the Toronto-based ArQuives and the IHLIA LGBT Heritage in Amsterdam (formerly Homodok), and digitally at EBSCO's LGBTQ+ Life and the Erie County Library, among others.

To have such a longstanding newsletter in Erie is rightfully — and no pun intended — a point of pride. In Pennsylvania, there are like-minded organizations like The Central Voice out of Harrisburg and the Philadelphia Gay News. Sources such as Pittsburgh's OUT and Cleveland's Gay People's Chronicle and PRIZM ceased print publication in 2012, 2015, and March of 2020, respectively. "There aren't a whole bunch of us right now," Mahler mourned.

For Mahler and his decades-long collaborator Deb Spilko, EGN has been a labor of love. "This is a volunteer thing and has always been a volunteer thing," Mahler explained. "It was pretty much me and my friend Deb doing most of the work." Spilko had also been working on a similar predecessor to EGN, in the form of a newsletter for the group PALS (standing for Personal and Affirming Lifestyles), which met at St. Paul's Episcopal Church in the late 1980s and was active during the same time as the Erie Gay Task Force. "Things like that were very much 'hush-hush,' difficult-to-find stuff," Mahler explained. "And then the first local gay wedding I went to was also at St. Paul's Episcopal, and that was just about six years ago" he enthused.

"When I was first getting involved locally, I remember the term was 'LesBiGays.' So, we were doing sexual orientation, but that didn't include trans commonly. And it's now been the case, of course, that you'll see LGBT or LGBTQ, LGBTQAI," Mahler spelled out. "So when people complain about why we're adding letters, I tell them, yeah, it's been in flux for a while, and that is totally cool."

Recalling Erie's acceptance of him in the early '90s, he said "I remember when I first came out, I was feeling really nervous. Because it was an unknown, not because I know something bad is gonna happen. I do remember obsessing about, 'Oh, my God, someone's gonna slash the tires on my car.' For some reason, I was really worried about that." Mahler quickly noted as well that "I know, again, I'm speaking as a white, cisgender non-disabled, born-in-the USA, English-speaking male. But the fact that I didn't run into anything, suggests that somebody probably could have [been publicly out] successfully earlier."

Thankfully, progress has been made over the past few decades. Even so, there is an extremely real possibility that ground will be lost, and the Supreme Court will overturn its 2015 Obergefell v. Hodges ruling that legalized same-sex marriages. As the pandemic continues and many of us remain socially distanced, community may be more important now than ever. An inclusive, accepting community is one of the things EGN has helped to foster here in Erie. In its 300 issues, it's documented our past and present, shining a bright and hopeful light to the future.