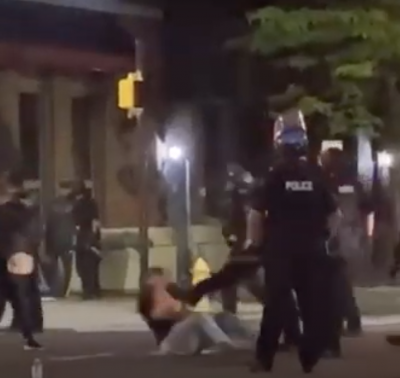 Erie Mayor Joe Schember announced the unpaid leave and sensitivity training an Erie police officer will undergo as a result of kicking a protester two weeks prior.

Schember's statements are a result of viral videos of 21-year-old Hannah Silbaugh being maced and kicked by an officer during the May 30 protest against police brutality and systemic discrimination.

In the weeks that have followed, community members demanded action from the city. Over 12,000 people have signed a petition calling for the termination of the unidentified officers involved in the abuse of Silbaugh.

According to Schember, the investigation conducted on the officer in question found that the officer had no past complaints and has never exhibited behavior that warranted disciplinary actions.

"He is a well-respected, up-standing member of the community," Schember said. "The officer did follow approved police procedures, however, while the level of for is permitted under the current policy, I have concluded that the manner in which it was applied by the officer was inappropriate."

Because of these factors, Schember said he made the decision to suspend the officer for three days without and limit him to desk duty until completing sensitivity training which includes de-escalation, cultural competency, and social justice. The command staff and the rest of the Erie Police Department will also be required to take the same training.

"We wanted to gather all the facts and look at every side," Schember said in Monday's press conference. "I would not allow myself to act emotionally and quickly apply a short-term Band-aid."

Instead, Schember explained how he wanted to look at the larger picture and work on taking steps towards real and sustainable change to end racism and prejudice in Erie.

Police Chief Dan Spizarny joined Schember at the press conference to present the details of the investigation.

According to Spizarny, the officer arrived and watched peaceful protesters at 6 p.m. before they were replaced by "a different group bent on confrontation and destruction."

"Beginning roughly at 9:20, all police personnel on the scene were subjected to attacks that included potentially deadly force," Spizarny said.

Two hours into the riot, the officer encountered a protester.

"His decision to use force and the manner that he did it needed to be reviewed within the existing department's policies and procedures," Spizarny explained.

Spizarny recounted arriving to work the next day and watching the video on social media of the Erie officer kicking Silbaugh.

"My immediate thought upon viewing the video was disgust," he said.

Not being able to identify the officer from the video, Spizarny said he immediately notified inspector Mark Sanders to investigate. Minutes later, an officer approached the police chief and identified himself as the officer in the video.

"He immediately expressed his remorse for how this appeared and explained why he acted in that manner," remembered Spizarny.

As part of the internal investigation, Spizarny explained that over the past two weeks Sanders collected statements from the officer involved and officers who were present, reviewed hours of surveillance footage, reached out to the protester's attorney and was denied an interview, obtained statements made by the protester from news outlets, and reviewed policy, procedures, and past records. Sander's investigation has since been completed and turned over to District Attorney Jack Daneri for an independent investigation.

"This officer was clearly performing his duties under extremely dangerous conditions," Spizarny stated. "He encountered a protester preventing police from advancing. Proper police procedure is to ensure no individuals get behind the police line as they move forward."

Because the progressive steps of force used, were unsuccessful, Spizarny said the "officer was justified to increase the level of force."  The next level of force includes the pushing, pulling, or physical touching in order to move a person.

"The protester was in a sitting position and in that split second, the officer made the decision to utilize his foot to push the protester to get her to move. Upon review of several videos, it is clear that the officer lifted his leg and used the bottom of his foot to push on the left arm of the sitting protester. It was not a striking kick.  It was not to the head. Under our current department policies and procedures, the use of force was justified. "

Spizarny closed by saying that although we strive for perfection, we are human.

"We must look at the entire picture when we judge our actions," he said. "This incident done under these circumstances was not done intentionally or with the intent to harm, but with the purpose of doing a tough job under extremely difficult circumstances."

Schember also announced the revising of police policy and procedure based on new city, state, and federal initiative and reform and the continuing of initiatives to improve the community and police relations.

"By doing this, I'm hoping to send a very clear message to everyone in Erie: I am taking these actions to build a higher level of trust between the police and all Erie residents, especially for our Black and Brown communities," the mayor emphasized.

In his reflection, Schember thought that while there are people who "feel we are doing too much, and people who feel we are not doing enough."

"We are doing what we believe is just, and what will bring Erie together as a community where everyone is accepted and valued regardless of their religion, their ethnic heritage, their address, their gender, their age, their job, who they love, or the color of their skin."

The name of Erie police officer involved has remained unreleased to the public.