Erie Philharmonic Doing 2020-21 for the Love 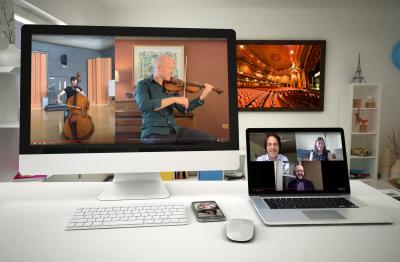 The term "philharmonic" was first recorded in the English language all the way back in 1813, through a London society's promotion of instrumental music. But go back further, past its antecedents in French (philharmonique) and Italian (filarmonico), and you're left with a mashup of the Greek words "philos" and "ta harmonika," which translates literally to "loving harmony" or "loving music."

If we know one thing about love, it's that it will find a way. And we also know that one is in the right line of work when they love it so much, they'd do it for free. Despite the challenges presented by COVID-19, the Erie Philharmonic is moving forward with a plan for the 2020-21 season. And they're doing so with zero revenue from ticket sales or subscription packages — nothing but the continuing generosity of their supporters.

It's a beautiful thing when love is reciprocated. Look no further than the anonymous Philharmonic board member who plans to match every Erie Gives Day donation dollar for dollar when the annual nonprofit fundraiser arrives on Tuesday, Aug. 11. And definitely do not overlook the unwavering dedication of Musical Director and Conductor Daniel Meyer and Executive Director Steve Weiser, each of whom has received a long-term contract extension in return. Weiser's five-year extension through 2025 brings him to a full decade spent with the Phil, and Meyer's six-year extension brings him to nearly two — 2026 will mark Meyer's 19th season as conductor.

For now, though there is the unique challenge and opportunity of 2020-21. The originally scheduled concert lineup, which was to include symphonic standouts such as the opening "A Night at the Opera" and pops highlights such as "Star Wars: A New Hope Live in Concert,", have been put on ice — and we're not talking the Zamboni-groomed variety the Erie Otters play on. Scores of attendees will not fill the seats of Erie Insurance Arena as initially intended, a workaround which was to keep the season skating along as the Warner Theatre undergoes significant renovations deep into 2021.

Instead, both new and long-time listeners will be invited to tune into WQLN TV, Facebook Watch, YouTube, or eriephil.org for one monthly, publicly broadcast concert. Each will first air live on a Thursday at 8 p.m., with a re-airing the following Sunday at 2 p.m. An official program has yet to be announced, but Meyer says it "will capitalize on the strengths of the musicians," with the individual performers partnered up in unique or complementary combos to woo the ears.

Matt Swanseger's disdain for COVID-19 has reached a crescendo. He can be found with his ears pinned to the floorboards listening for good vibrations, or at mswanseger@eriereader.com