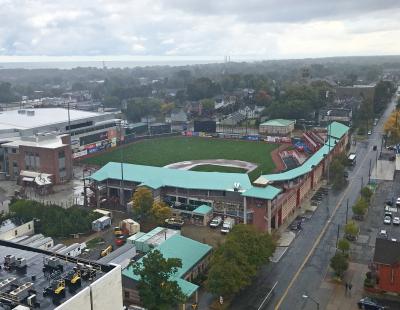 At noon on Wednesday, Dec. 9, The Detroit Tigers announced a new affiliation structure, inviting the Erie SeaWolves to continue as the team's Double-A affiliate.

This comes as welcome news for Erieites, as a late 2019 announcement from Major League Baseball (MLB) held an uncertain future for the SeaWolves, despite the ongoing multi-million dollar renovation of the SeaWolves' UPMC Park.

On Dec. 9, MLB offered player development licenses to 119 teams, with 43 teams not making the cut.

Erie was on the former list, with the entirety of its fellow Eastern League teams set to remain as well.

Erie has been home to the SeaWolves since 1995, when they were an affiliate of the Pittsburg Pirates. After a stint with the Anaheim Angels, Erie has worked with the Detroit Tigers since the 2001 season.

"We are thrilled and honored to be invited by the Tigers to continue as their Double-A affiliate," SeaWolves Owner/CEO Fernando Aguirre said in a press release. "The SeaWolves and Tigers have built a strong partnership, and today's announcement confirms our commitment to Erie."

"UPMC Park has been through a major transformation over the last 18 months, and we look forward to having one of the best facilities in Minor League Baseball next season," Aguirre continued.

Al Avila, Detroit Tigers Executive Vice President of Baseball Operations and General Manager explained that "for nearly 20 years, Erie and its community have been great partners, and we're thrilled to invite them back as our Double-A affiliate." He went on to thank Aguirre, as well as state and local government officials "for coming together and supporting the much-needed facility improvements at UPMC Park for this coming season, including a new home clubhouse and training facility. The difference in workplace quality for our players is vital to their development, and we're looking forward to seeing these additions come to completion."

Erie Events Executive Director Casey Wells added that "we are excited that Double-A baseball will continue in Erie, and we're proud that the recent $16 million investment to upgrade UPMC Park played a pivotal role in that decision." Wells stated that "now that the MLB's updated facility standards have been finalized, Erie Events is committed to completing the necessary clubhouse improvements as soon as funding is secured to ensure UPMC Park meets MLB standards for many years to come."

"Today's announcement is a home run for Northwestern Pennsylvania and ensures that affiliated Minor League Baseball will remain in Erie for years to come," Pennsylvania Attorney General Josh Shapiro shared. "The people of Erie understand the importance of keeping institutions like the SeaWolves in their community, and I hope other cities around the country learn from their example. A year ago, I urged Commissioner Rob Manfred to reconsider Major League Baseball's plan to remove affiliated baseball from Erie, PA. Since then, my staff and I worked directly with the Commissioner's Office, the Tigers, and SeaWolves owner Fernando Aguirre to reach an agreement that would allow the team to retain its Double-A status. Thanks to additional support from Governor Wolf, Erie's legislative and local leaders, and the community, the SeaWolves are here to stay."

Many local politicians echoed positive statements for this news as well.

Erie County Executive Kathy Dahlkemper said, "this is excellent news for our economy, quality of life and vitality in Erie County today and for future generations. We are thrilled that families will bond and continue to experience one of their favorite pastimes at the Erie SeaWolves games. This news comes at a time when our community needs it most."

Erie Mayor Joe Schember said, "I am thrilled that the SeaWolves are staying in Erie. Baseball has played a very important role in Erie's history. From the Pontiacs to the Sailors to the SeaWolves, baseball has been a vibrant part of our community for over 100 years. COVID-19 cut the 2020 season short, but I hope we return to a vibrant, full season in 2021."

"I still remember fondly going to Erie Sailor games as a kid with my older sister," Schember recalled.

Schember noted that the SeaWolves attract over 250,000 fans to attend games and other events at UPMC Park, book 1,800 hotel rooms, and donate more than $250,000 in cash and in-kind donations to community organizations.

"The MLB's announcement today was the best call Erie could have received," state Rep. Pat Harkins said. "Our community has a unique relationship with the SeaWolves, with ties that run deep for so many of us. Years ago, my father worked with city officials to get the stadium built, and since then, it has been a place for our community to cheer together – and also a significant source of jobs and revenue."

State Representative Bob Merski explained that, "Today's news from the MLB means that our beloved SeaWolves will stay right here in Erie, where they belong. Beyond the entertainment value, the decision means Erie will continue to reap the tremendous economic benefits that go with hosting a double-A-list sports team. It also means that the state and city's multimillion-dollar stadium investment was not in vain. The MLB's decision made sense – Erie has the venue, the commitment and the talent to make sure our ongoing partnership remains a success."

State Senator Dan Laughlin said, "Since 1995 the Erie SeaWolves have been an exciting part of the fabric of our community. Today's announcement is great news. This year especially, Erie area residents need reasons to cheer. Hopefully, by the time the baseball season starts, we will be back in the stands howling for the home team."

State Representative Curt Sonney added, "I was glad to hear of this news. The SeaWolves are a great asset to the Erie area."

"This is welcome news for the entire region," State Representative Ryan Bizzarro said. "The SeaWolves create jobs, revitalize our communities and boost economic activity for Erie and surrounding communities."

"Pennsylvania and Erie Events played ball and made these significant investments in UPMC Park – I'm glad that this team will stay open for our community and we'll fully realize the benefits of that investment," Bizzarro added.