Erie Theater: From Suspense to Farce

All An Act and Dramashop reviewed 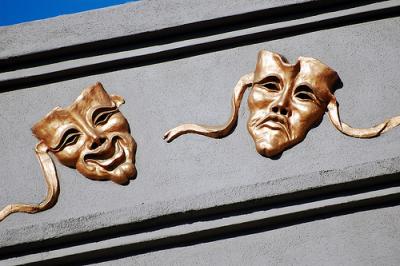 The perfect introduction to a murder-mystery
As I approached All An Act to see the final performance of "The Mousetrap," I found a sidewalk full of people standing in front of the building.
After a girl asked if I was there for the show, she said a bomb threat had forced everyone to evacuate the building.

Now, I'm somewhat numbed to bomb threats ever since kids from my high school thought that would be a clever senior prank. (Side note: glitter bombs are cleverer than bomb threats.) So as I stood waiting, I half-smiled considering the unintentional irony that may well have just set the ultimate stage for the mystery play that is "The Mousetrap." Fortunately, we were only delayed a few minutes before filing back in unharmed.

Agatha Christie wrote "The Mousetrap" in 1952, which is now the longest-running show in history. It also proved successful for All An Act.

"'Mousetrap' has been our second highest-selling show in our eight years," said director David Mitchell, who also played the part of Detective Sergeant Trotter.

The cast of eight stretched all personality types as strangers stuck at a snowed-in boarding house, owned by the well-intentioned Mr. and Mrs. Ralson, played by Wayne Gardner and Dorothy Kaliszewski. Each ethos offered a differentiating trait, magnified when they learned of a killer on the loose with detective on skis not far behind and ready to interrogate. And the clashing of those characteristics made each of them a suspect. The uncombed, quirky Christopher Wren, played by TJ Hinman, gleefully annoyed a sharp-tongued Mrs. Boyle, played by Ruth Scandale. The understated beauty of Miss Casewell, played by Lauren Kennedy, offered slicing glares as Mr. Paravicini, played by Michael Weiss, and Major Metcalf, played Jerry Brace, tried to keep things light-hearted.

"The audience loved it. You heard everyone gasp when the killer was revealed," said Mitchell, as I nodded.

All An Act's production of "Mousetrap" pulled off the tough-selling element of suspense flawlessly, leaving me on the edge of my seat, wide-eyed with anticipation more than once. And while the audience mustn't reveal what happens, I will say the ending of this, as Christopher Wren would say "deliciously macabre," mystery was much more climactic than that bombshell of intro.

The stage for "The Killing of Sister George" was tucked back into the depths of the Renaissance Center. The performance, produced by Dramashop, opened in the tidy living quarters of June Buckridge and Alice "Childie" McNaught. The roommates' relationship isn't as tidy, as Childie finds comfort in her doll collection to cope with the abusive behavior of a distraught June.

June plays a famed radio personality, Sister George, and has a sneaking suspicion her beloved character will soon be killed off. To the delight of the audience, her reaction to this is anything but graceful. Her manic gestures make her wobble with nerves, and June only finds solace in sipping a stiff drink and barking commands at poor Childie, making their banter hilarious. The audience lapped up every frantic mannerism of Sister George, played by Nathan McCarty.

I wondered how much time McCarty spent traipsing around in a wig to prepare for his part. He perfected the act of a seemingly menopausal basket case with every theatrical motion and screeching demand for another gin. The airy Childie, played by Erika Krenn, dutifully abided every one of June's requests, only to be swatted at and sent back into the kitchen.

Enter Mrs. Mercy Croft, who comes to June and Childie's home to confirm their fears of Sister George's demise. Mrs. Mercy, played by Emily Cassano, is shocked at June's wild behavior, which made her look even more absurd. At this point the audience couldn't stop cracking up at the debauchery unfolding on stage. Childie considers her escape, Madame Xenia tells callers mourning the death of Sister George that the character is busy getting ready for her own funeral, as June goes completely off her drunken rocker. Hoots and giddy hollers from the crowd confirmed Dramashop successfully pulled off this British farce.

"The show is its funniest when the cast is having fun, and they definitely were," said director Jessica Ciccone. "An audience member came up to me and said he was at the original performance in 1964. He said it was a nice nostalgic trip, and that we had done the performance justice."

by Julia Nene8/22/2012, 5:30 AM
I?m not just lurking aimlessly through cemeteries; I have a guide. It?s the Let?s Move Outside Erie County Recreational Passport, and I?m currently making my way along the Fort LeBoeuf Trail. LeBoeuf is one of 10 trails, and my mission is to complete all of them by October 20. If I do, I?ll get a prize for enjoying the outdoors, getting my heart rate up (climbing on covered bridges optional) and learning the stories behind local landmarks, such as Hare?s resting place. Pretty sweet deal, right?

by Julia Nene8/14/2012, 7:11 AM
With your help, area non-profits like Nurturing Hearts to receive matching gifts today only.

You Ought to Know: Shawnta Pulliam

by Julia Nene8/8/2012, 7:00 AM
It isn?t always easy. Every one of us has that one dark memory, that one bully, that one regret that creeps back every so often. Did you let that define you? Shawnta Pulliam?s answer is no.

by Julia Nene7/11/2012, 7:30 AM
I'm excited. Two of my favorite things - public radio and drinking beer from a jar - are marrying to make something even better.

by Julia Nene5/16/2012, 9:26 AM
On Thursday, May 17, an official opening ceremony will reintroduce ?The Feather,? now reconstructed and here to stay.

You Ought to Know: Betty Amatangelo

by Julia Nene5/3/2012, 11:11 AM
In the softly-lit studio of Art of Yoga, people are filing in with their mats. It's dark out by now and it's a chilly night, but inside the lamps and plants and wood floors create a cozy, safe atmosphere. This isn't just any yoga class - this is Yoga of 12-Step Recovery, or Y12SR.