Erie, To be or not to be: It's a celebration!

In flashes of heat the summer has been quickly passing. Toby Keller relives the moments that flew by too fast. 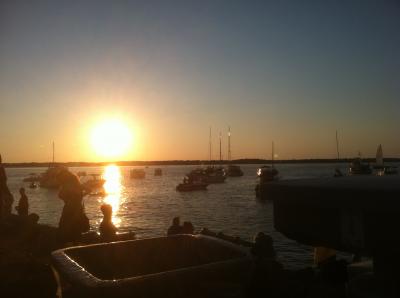 Erie, I've been so wrapped up in you that I forgot to write. What do you care about my love letters anyway? It's better just to enjoy ourselves, these summer nights, these crazy happenings. Remember that day we were treated to a screaming match in the driveway off Peach turning into the Millcreek Mall by that plaza with Northwest? The dude tried pulling out in front of traffic and got stopped halfway. Then he put his truck in park and got out screaming.

"You hillbilly [obscenity]," he roared, his black shirt soaking up the relentless sun and his face as red as the stripes on our flag.

The other guy, stuck in his car on his way into the mall and facing a serious beating if he didn't move at all, parked his car with a line of traffic behind him and stepped out to meet the man in black who was now to the point of spitting on himself and fist-pumping the air as he tried to point out the perpetrator he felt was the cause of it all.

We had front-row tickets to that one, baby. I felt like we had all the time in the world to watch. Time flies… the other day it was June; now half of July is gone, and I can see the end of summer, even though it has just begun. We've been working hard every day, and playing hard every night. We've been to concerts on the beach, the bay, the block, and still we've had time to walk through the gorge and sit on the beaches of Presque Isle while reading a book to the sound of waves and the wind that pushed them.

I figured Independence Day with you, Erie, would begin and end with a bang. I wasn't wrong, even though the odds were stacked against me since the calendar execs made some horrible arrangements of our nation's finest holiday—Wednesday became a weekend unto itself surrounded by Mondays and Fridays. I left work Tuesday afternoon with the feeling of Friday in the air, yet somehow it was Saturday too, and Sunday would be Saturday but really Wednesday. Then another Monday and Friday before the week was out. My head was scrambled as I drove to my apartment. What to do, what to do…

My roommate was there when I walked through the door, pouring eggs out onto a skillet and standing in their steam.

"What are you doing tomorrow?" I asked.

"Working a double shift," he responded, shuffling the sizzling whites into the yoke.

"What do you mean? Everything is open on the Fourth."

"It's a federal holiday man. Take that to the Supreme Court and get your day off."

After a heated debate about our country's patriotism and the need to buy groceries on a holiday, I walked out of the kitchen to my room. No worries, I thought, I have the day off and I'm going to celebrate whether this town is or not.

I shouldn't have worried. Erie came to party while my roommate was stuck at work.

I called my mom when I woke up; being the good son that I am, I wanted to wish her a good holiday.

"Your father and I are going down to the parade," she told me. It would be the 65th consecutive Fourth of July parade in my hometown. It would also be the first one to get rained out. Rumors spread that it would continue the following day, or maybe Saturday since people had to go to work. No one knew for sure, except thsoe that did know and they didn't get the word out fast enough to stop people from making up all sorts of things. Either way, they never got their parade.

Erie's skies were shining with a beautiful blue. If there were clouds to the east or south, I couldn't see them. I had no idea my parents were running from lightening with thousands of other people, kids with empty candy buckets, and their panicked parents herding them to safety with folding chairs bouncing open creating obstacles for the rush of people behind them.

I was sitting by a pool, eating chicken with the sun beating down on the back of my neck and reflecting off the water into my eyes which smiled back. I could hear fireworks in the distance, their faint pops drifted over the city all day.

Hours that seemed like minutes passed before the real show began. Fireworks covered the sky above the bay, reflecting on the water to form art the eye can see but the hand can't duplicate. I smiled in awe, unable to take pictures or interact with anything but the sight in front of me.

Doesn't that seem like yesterday, dear? Just yesterday we did that. Now we're back to the normal work week, but it feels like the pace has picked up a bit. Any night of the week could be Friday if we wanted it to be. I like that: we don't even need holidays in the summer with all the stuff you got going on.

We can't stop the days from ducking off the calendar, I'm sure of that, but we can savor every second. You've been a hot date this summer, Erie. By the looks of the lawns around town, I'd say maybe even a little too hot. I'm not complaining though. Brown grass never stopped me from having a good time. I just don't want to blink and miss the rest of summer. So, let's stay awake after these long days and enjoy the warm nights while we can.