Erie, To be or not to be: No sadness in the rain

Toby Keller?s continued story about his summer love with the Gem City. 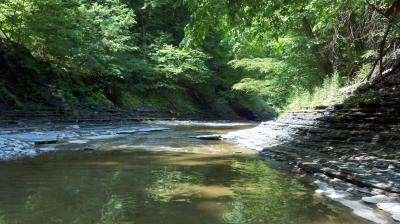 I drove down on State Street on a Friday in my near classic '93 Grand Prix wearing boots, jeans, and a company polo, rushing a little so that I could clock into work by 8:30. Past 18th  Street and it was 8:27. I turned my stereo down and leaned out the window into the breeze. Pulled into the lot near Eighth and I ran up to the elevator. The waiting areas were warm, holding the outside temperatures.iI got into my boss's fourth-floor office where we coordinate our plans for the day; he is responsible for maintaining thirty-one buildings in the Erie region. When I sat down I realized there was sweat gliding down my forehead. I knew then that I would be soaked by the end of the day; I had concrete to patch, a picnic table to stain and a whole list of other jobs to get through. The cold wind from the AC unit held the sweat-bead in place for a moment before I swiped it with the back of my hand.
It wasn't a surprise, by that point. The whole week had been a scorcher. But how can I complain about warm weather leading up to Memorial Day? That's un-American, and I am indeed a patriot. The flags lining the Bayfront bridge were a reminder that Erie's loyalties lie likewise. She wears the colors well, even elegantly. On the Holiday weekend her tan lines darken while she lets the world know she's having fun. As I sat at my computer, waiting while a blue circle on the screen wasted away my time, a girl popped her head in and, seeing my perspiring condition, commented that Saturday it was going to be even hotter, 93 degrees maybe. She shuttered. I smiled. She went on to tell me how she would never complain about the humidity in Pittsburgh again; Erie, she said, was "dreadfully humid."
It wasn't the first time I had heard an unqualified pseudo-meteorologist expertly drop misinformation. I can only imagine what reasons they do it: They like delivering bad news, something about seeing another person struggle with their weather report brings them joy, or maybe they just believe what they say and have nothing good to say ever. Anyways, I was ready for it; I knew it had to be coming.
Some people just don't understand Erie. They think her mood swings are on purpose, acts against someone for some forsaken reason. Maybe we have done enough to infuriate her into a few bad storms and erratic conditions, but I would guess her natural cycles influence things just as much. Right, guys?
So after I got through work on Friday, had my few drinks, and settled into the holiday weekend, I decided Saturday would be spend in the gorge at Penn State Behrend. After a week of driving through the city, patching concrete in parking lots, repairing damaged building exteriors, and generally sweating the whole time, I thought the cool streams and forested shadows sounded about right. Thankfully Erie offers me a lot, and I didn't have to go far to find her sweet spot.
I parked on Cooper Road. Packed with a novel I had been neglecting for far too long, a few beverages, an apple for my health, and straight-brimmed hat, I headed out from into the woods, down a wide beaten path. I walked and scanned the fallen leaves and broken limps around me, then looking up into the canopy of green leaves. The Bayfront bridge towered in front of me, its support columns dwarfing the trunk of any tree in sight. Its overwhelming size as I stood beneath it angered me for a moment. I wished the trail I was on wasn't so worn, the evidence of our manipulation of nature so apparent.

Then I wandered past the bridge back into sunlight, leaving it behind with the thinking that it was a part of the city and part of my lust for her. The cohesion of savage and civilized, nature and art, make her beautiful. And I'm looking for 'the daughter of the devil himself' and 'an angel in white'.
I continued walking, straying from the path, taking my shoes and socks off so I could traverse the creek around its slowly-eroded, shale bends. The water was shallow, often not covering a majority of its bed, and it was warm in places, icy in others. I lost track of time while thinking about each step, gauging the surface of rocks before settling my weight on one foot, then the next. I walked until I couldn't see markings of people, although I'm sure they would have appeared if I wanted them to. But I was content with the spot, so I sat, sunning myself on a rock while cooling my feet in the currents around it.
An hour or so went by, 45 pages in my novel anyways, before the first person walked by. Had I not tilted my head up to take a swig and cool my lips, I wouldn't have known they were coming. It startled me for a second; I had a notion that I was secluded with Erie in a sort of sanctuary. The person came and went… I looked back down to the pages before me and forgot about them. Several times I sat the book aside and splashed into the water, skipping stones down into the next pool, over a short waterfall 15 feet away. I heard birds chirping, and they sounded melodic compared to the incessant chirps outside my apartment window.
Once I had satisfied my craving for words and soaked up the peace of laying in a wooded creek on a hot summer day, I packed up my things and began walking out, noticing a slight breeze coming upstream, right from the lake. It strengthened as I walked; the sky, once wisped in stringy white was turning thickly gray. I climbed a bank and put socks on my wet feet and shoes after that and hurried down the beaten path towards my car. In the thick brush, it felt like twilight and I tripped over the roots hidden in the blackness at my feet. As the woods cleared to the field beneath the bridge, the rain started falling in rhythmic sheets. I stood under the bridge, watching it fall around me, thanking the object I had almost cursed on my way in, then bolted to my car before getting totally soaked.
As I drove back to my apartment I smiled, enjoying the claps of thunder and streaks of bright lightening in the distance and around me. I thought to myself, "We needed this." There was no sadness in the rain. 'Everything is better when wet' isn't a complete lie. Erie gave me what I wanted, and I'd be selfish to complain. Her moods are part of life, and each one is as necessary as the next, even the bad ones—each road block, plan-ruining storm, pessimistic neighbor is a reason to be thankful for what good she gives us to combat those things. Sometimes it is better to go with the flow and gladly let the rain fall, than be stubborn and wish you had a different life with different problems.
Toby Keller can be reached at tkeller@eriereader.com
Previous entries and other work by author can be found here.