Erie, To be or not to be: Summer Parties

The warmer it gets, the crazier the parties become. Toby Keller has a look at the scene in Erie. 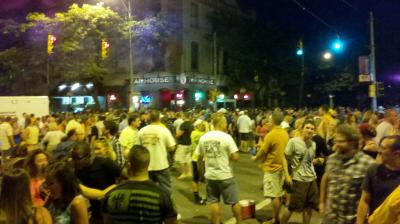 Erie has been showing me her wild side a lot lately. It seems like every night there is a party to go to, a good time to be had, and the weather hasn't been cause for complaint at all. She's been sparkling, Erie has. Her summer glow is like the shine of baby oil on the legs of a supermodel in the sun. I've been lusting after her, and she's been as flirtatious and lively as ever. She has even started to shut down entire city blocks just to have a little fun.

Last week, when the Tap House sponsored the weekly Block Party, I saw Erie's partiers in full force. As The Romantic Era and the M-80's played on stage, thousands packed into the square three blocks from the bay and enjoyed a beautifully warm night and plenty of entertainment. I went there by myself unsure of what to expect, parked a few blocks away, and walked into Erie's hotspot. The air held the humidity and heat from the scorching afternoon. Tents buzzed with activity and the street, from sidewalk to sidewalk, was congested with every sort of person. It was the first block party I had ever seen. My first thought was: this is legal?

I meandered through the crowds, bumping into more people I knew than I expected. I found old family friends—there  with their kids—co-workers, fellow students, complete strangers who felt compelled to start conversations with me, and, it seemed, every other walk of life Erie had to offer. Some brought coolers, some were carving wooden sculptures with chainsaws, some danced, gossiped, creeped, and whatever else. But most were enjoying themselves.

I left early enough that I wouldn't have trouble driving home, and so I could catch the end of the NBA playoff's final between the Heat and Thunder. My night ended in sorrow, but it was nothing Erie did, and more about the unexplainable loyalty I had in that basketball game. I should have stayed at the block party.

That Saturday, as temperatures dropped from the high 80s into the 70s, I walked out of my apartment with a list of things to get done. It was to be an ambitious day: I needed to go to the library for a few hours of research, then meet my parents for lunch, then go to a pool party near Peach Street. Somewhere between that, I knew I would need to do some shopping as I had failed to find any deodorant in my apartment that morning. I didn't need the attention that smelling bad would bring me.

I ran to Dollar General on State Street, where I searched for the deodorant for 10 minutes before realizing that they kept it behind the cashiers like a normal store would do with cigarettes. I explained to the poor teenage girl working that day which kind of deodorant I wanted so she could pluck it from the shelf for me then, with decent smelling underarms, I headed north to the library.

After some research, it was back up State Street to the Plymouth where my parents were meeting me. On the way, I was stopped by a man who said his name was Louis. Louis insisted that he pray for me. I wondered then if I looked like I was in trouble, even though the sky was blue and I was having a fairly good day.

My parents didn't ask to pray for me. They bought me lunch, and we talked about the times I was having with Erie. I bragged to them about how I was learning her streets, starting to develop a sense of who she is and what she is about. I felt a bit like an ambassador, telling them which way would be the quickest to get back home as if I knew all the secrets of the Gem City. It felt good, and they listened like they could actually learn something about her from me.

When they left, I walked to my car and rolled away towards the pool party, which was already underway. The smell of grilled chicken and booze wafted over the fence to the street where I parked. It reminded me of the parties I would have back home, everyone in their swimsuits all day long, and food continuously rolling from the kitchen to the grill and picnic tables. The day went by with too many laughs to count, most of it directed at the drunkest guy there. He wore a cowboy hat, black sunglasses, a sleeveless Harley T-shirt, jeans, and cowboy boots. I don't think he had ever ridden a horse, or owned a motorcycle. He ate chicken off the grill before it was flipped once, still pink through the middle, and let the grease drip down his hands the whole afternoon.

He left, hammered and ready for bed, sometime in the mid-afternoon. The rest of the people there seemed sane and able to hold their liquor. I sat with my legs dipped into the pool, listening to their stories until the sun fell in the sky below their house when I dried off and said my goodbyes.

I got back to my apartment that night completely satisfied with Erie. She knows how to party as well as she knows how to work. That's not easy to find.

Toby Keller can be reached at tkeller@eriereader.com.
Previous entries and other work by author can be found here.