Erie's Land Lighthouse: The Stories We Want to Tell

At over 200 years old, historic structure has much to say 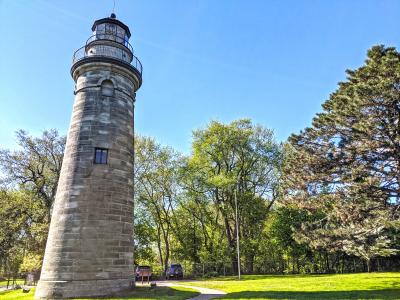 Erin Phillips
The Land Lighthouse sits at the foot of Lighthouse Street on Erie's East side. It shares it's space with a public park and playground overlooking the lake. Getting the community involved with the Land Lighthouse is a priority of it's new steward: Emily Butler.

When one thinks about the historic lighthouses in Erie, the Presque Isle Light Station and the North Pier Light are usually the first that come to mind.  And with Presque Isle State Park receiving upwards of 4 million visitors a year, they're two lighthouses you can't really help but see, even if you're not seeking them out. But Erie's first lighthouse is often overlooked. Originally constructed in 1818, the Land Lighthouse, at the foot of Lighthouse Street on Erie's east side, was the first lighthouse put into operation on the Great Lakes. The lighthouse has a long and interesting history and has had many caretakers over the 200+ years of its existence.

Nowadays the Land Lighthouse has the fortunate distinction of falling under the care of the new director of the Presque Isle Light Station, Emily Butler. She has a close connection to the Land Lighthouse, as the grounds are now her home and she has exciting, progressive plans for the future of the light to help keep its history relevant into the future. And for the first time in many years, it will be open regularly for public tours.

In the very early days of Erie's settlement, the waters of Lake Erie along the peninsula were some of the most dangerous waters in the Great Lakes. Many ships were capsized in unpredictable weather or were run aground due to unexpected land masses close to shore. It was around 1800 when Daniel Dobbins (ever heard of him?) started lobbying Congress to fund a lighthouse, to help make Erie a more viable port city (which would also greatly benefit his own business ventures). As it stood, navigating the channel between the lake and the bay was nearly impossible for a larger cargo ship. There were multiple sandbars and the land of the peninsula shifted yearly, making navigation inconsistent and unpredictable. Most ships had to unload their cargo onto smaller vessels to get through the narrow passage, which was difficult (especially in Erie weather), costly (a lot of cargo fell into the water), and took a lot of time.

So in 1818, around the same time that sandbars were removed from the channel, the original Land Lighthouse (then known as the Presque Isle Lighthouse) was built and lit on the bluff at the entrance to the channel. The land where the lighthouse sits was donated by John Kelso, who owned large tracts of land in that area. At that time, the original lighthouse was a 20-foot wooden rectangular tower constructed very close to the bluff. Its array of lights, which had a reach of up to 10 nautical miles, would have been originally fueled by sperm whale oil until after the Civil War when most lighthouse lamps switched to kerosene. Eugene Ware, in his book Pennsylvania Lighthouses on Lake Erie, makes an interesting connection to this fuel source evolution: "The Confederate military had three or more skillful commerce raiders that cruised all along the eastern seacoast. In fact, the Confederate raiders Shenandoah and Alabama destroyed over 46 New England whalers. If you take those losses and add them to all the other losses during this period, over 50 percent of all American whalers were sunk."

The original lighthouse built in 1818 didn't last too long. It was built on soft, sandy soil, often described as quicksand, and the tower itself had a simple and insufficient foundation. Over time the tower started to lean dramatically and in 1857, they built a new tower with a slightly better foundation, but in the same spot. As you may have guessed, this one also started to falter. So 10 years later, they made the sound decision to move the tower south about 200 feet from the edge of the bluff and constructed a very sturdy foundation. This 1867 structure is the same one we see today.  It is made of Berea Sandstone to aid in its structural integrity (and in its timeless beauty) and it's Fresnel lens had a reach of 15 nautical miles. Not long after this lighthouse was completed, the construction of the Presque Isle Lighthouse began, and with the North Pier light in operation, the Land Lighthouse became unnecessary and was decommissioned in 1899. And yet it still stands, right in the midst of an active neighborhood in Erie, waiting for someone to make it necessary again.

As I drove down Lighthouse Street, just past East Middle School on Erie's east side, I noticed what a charming street it is: full of older homes of varying styles. At the street's foot is a large, well-maintained public park and playground overlooking the lake, and off to the west sits the towering and strikingly beautiful Land Lighthouse. The iron fence surrounding the property is open and as I get out of my car, I see Emily Butler emerge from the caretaker's house, which was built around the time of the current Land Lighthouse and is now Butler's home. Her jubilant pup, Grover, barrels over to greet me first and after a few slobbery snuggles, Emily catches up. She starts by telling me her own journey to becoming the new steward of Erie's lighthouses.

Emily was born in Pittsburgh and got her undergraduate at Temple University in Philadelphia.  After finishing school there, she went on to receive her Masters in Historic Preservation from Tulane in New Orleans. From there she worked for two different Frank Lloyd Wright house museums, one here in Pennsylvania, then most recently in Arizona at Wright's summer home, Taliesin West. Once the pandemic hit and museum life drastically changed, she decided that moving back to her family's side of the country made sense and she applied and was selected for the director position of the Presque Isle Light Station. Around the same time, the Port Authority, which has ownership of the Land Lighthouse and has been responsible for its meticulous and expensive restoration, agreed to give management responsibilities of the Land Lighthouse over to the Presque Isle Light Station.

And with that agreement comes a great opportunity.  Butler is very excited to include the Land Lighthouse in her education committee's plans moving forward to bring programming and educational opportunities to the public, and more specifically, to the neighborhood where the Land Lighthouse resides. "We are in a community here on the east side. I think it is a great benefit to make people in this neighborhood feel proud that they have this great resource next to them. We want to get their buy-in, get them to be involved in it, make it a place where they can come and learn about history and be active in it. That's really what I'm going to work towards. Energizing neighborhoods, that's what preservation can do if it's done responsibly."

When Butler speaks about the Presque Isle Lighthouse and the North Pier Light, she points out that their continuing function helps in their preservation: the fact that these places are still in use as active aids to navigation gives them a leg up for their future care. Why get rid of something that is working and useful? But for a place like the Land Lighthouse, that is no longer working in its intended purpose, historians and preservationists have to shift their thinking: "Because it's not functional, we have to take a different avenue to make sure it's preserved and I think that avenue is making sure that it's a community resource." And opening the lighthouse for tours is the first step. The Land Lighthouse is now open for tours every weekend, Saturday and Sunday from 11 a.m. to 3 p.m. The Lighthouse will also offer a free community day the first Tuesday of every month. "I'm really excited to take it to the next level and figure out what kind of stories we want to tell. Our first question is always: 'What do we want people to leave here feeling and thinking about?'"

As we walk up the striking cast iron spiral staircase leading to the top of the Lighthouse, Emily speaks about the restoration work the Land Lighthouse has gone through, most notably the work done in 2004 by Erie-based Fiske and Sons Inc. The Port Authority also spent upwards of $400,000 to make sure that the Land Lighthouse will stand tall, and as it was intended, for another 200 years. The most noticeable change was the reconstruction of the 6,300-pound copper lantern room and the addition of a functional light, making the lighthouse impressive by night and day.  The view from the top of the lighthouse rivals any in Erie and is much like it would have been 100 years ago: an unobstructed, bird's eye view of Presque Isle, the North Pier Light, and Perry Monument.

As we wrap up and head back down the staircase, our conversation turns to preservation in general, how historic preservation in Erie is becoming more of a priority, and how we can keep places like the Land Lighthouse protected and relevant into the future. Butler believes that the key is sparking an interest in children, often outside of just the general history of a place: "I think that in preservation we get into this cycle of just talking about dead rich white men. There are so many stories that buildings can tell over and above what a traditional museum can tell, and that's always at the top of my mind. Yes, these people were important people in history and we tell their stories, but what does this building speak to today? So with the lighthouses, we can talk about things like engineering and how they were built. There's also so much maritime history in Erie, so we can ask: how do the Great Lakes function today? And how is climate change going to affect that? What is the lake going to look like in 20 years? It's a jumping-off point to tell a lot of important stories over and above just the history, which is important, but I always like to make history relevant to today."

For more information on Land Lighthouse tours, or if you'd like to volunteer to help, please visit presqueislelighthouse.org