Explore The Haunting of Hill House with All An Act Theater 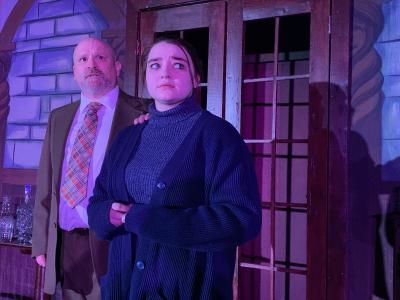 Joshua Mizikowski
Chad Santos (left) and Tori Snyder are among the stars of All An Act's production of The Haunting of Hill House, beginning its three week run on March 25

Starting on Friday, March 25, All An Act Theatre will be bringing their adaptation of The Haunting of Hill House to their stage. In this classic haunted house tale, Dr. John Montague rents an ominous, mid-Victorian house known to be haunted and "a place of evil" in order to make a breakthrough in the field of parapsychology. Once there, he invites visitors with psychic abilities to help him investigate the house's secrets.

Of course, many may be more familiar with Mike Flanagan's ever-popular, critically acclaimed Netflix series, but it was actually adapted from an original Gothic horror novel written by American author Shirley Jackson. Released in 1959, the novel has since become known as one of the best literary ghost stories of the 20th century; the story is noted for the complex relationships between its characters and the events they experience in the house. The story has been adapted for film twice as The Haunting (in 1963 and 1999), and in 1964, it was adapted for the stage by F. Andrew Leslie.

All An Act's adaptation is being directed by J.D. Mizikowski, and will feature Tori Snyder, Robin Rastatter, Chad Santos, Stephen Salchli, Lisa Simonian, Suman Kumar Pallerla, and Marnie Foss among its cast. Additionally, La Bella Restaurant is offering a special dinner and theatre package for Friday and Saturday performances. This deal offers guests prompt dinner service, a 15 percent discount on their bill, and 20 percent off tickets for the show. Proof of vaccination or a negative COVID test taken within the past 72 hours is required for entry. — Aaron Mook