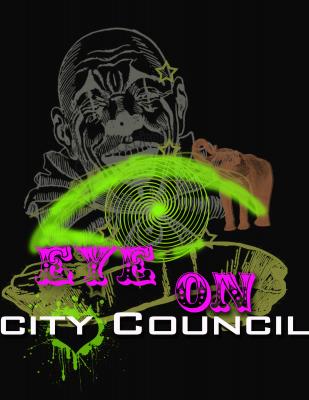 Both council and constituent came off sharp and resolute Wednesday at city hall. But while each side was in tune, the groups sang lightly different songs.

Constituents swam hard in the depths at the March 21tst city council meeting, touching on subjects as diverse as racism, poverty, taxes, and crime, turning up the deeper repercussions of each, and their broader community effects.

And while council stayed closer to the shallows, they made similar waves, making strides on issues that, though not as deeply poignant, make sizeable strikes against their given tides.

T-3 (local businessman Randy Barnes) went first. He made a point of clarifying his stance on conflict of interests, after Council President Curtis Jones asked him to fall back at the last meeting. Jones asked Barnes not to question councilman Joseph Schember's  ethics directly, saying matters concerning them had been "resolved." Jones was likely referring to a recent decision by the Pennsylvania Ethics Commission, not to pursue a full investigation on Schember, after a preliminary investigation turned up what the commission said was insufficient evidence to move forward.

"I I still have work to do," Barnes said. "There's some confusion on what conflict interest is."

Barnes also questioned the praise some council members publicly gave Schember at the last meeting, after it was announced that the city's credit rating had increased, and that a surplus had been saved.

"I think there's things he can do for the bank, while on council," Barnes said, finishing up. "We do know he voted to guarantee a bond that had PNC on it. That's (something) he could do on council, but couldn't do as an ordinary citizen."

Barnes wasn't the only citizen that questioned council's numbers celebration last meeting. Heather Garczynski said, that while the tax increase included in the 2012 budget affects homeowners most directly, that it doesn't stop with them.

"Even if people aren't home owners, the prices of rent still go way up," Garczynski said. "They're renting it out to you and me, and their property taxes go up by 14 percent."

Garczynski noted that while property taxes, and rents rise, assistance for the poor stays the same.

City council regular William McAdory started off saying there was a war on black men in America. McAdory likened the Trayvon Martin case, a controversial incident that made national news-- a black teen was shot while apparently doing nothing wrong—to a local news incident with somewhat similar implications..

McAdory compared the local Teri Rhodes child murder case to the local Tania Coleman case. In both cases it had been found that a child had died because of the actions of the mother. But while Rhodes, who is white, got off with minor penalties, Coleman, who is black, got life.

"They let her go," McAdory said, referring to Rhodes. "They don't even arrest her. They sent her back home to Michigan."

"Never trust a magician that believes in his own tricks," Wagner advised.

"It's interesting to me," Wagner said, "how council can be so excited about borrowing money at a lower interest rate. Our third biggest expense, after police and fire, is debt service. "

In other news, Councilman Merski put up a resolution sealing council's stance against new state voter ID laws that many believe will make it harder for disenfranchised voters to make it to the polls. Props to Merski, Council, and president Curtis Jones, who resolved that, if for some reason the measure was passed, that community action would be necessary, to offset disenfranchisement locally.

Councilman Schember put up a resolution that serves to save the city 75 grand. The motion would combine water and sewer bills to save dough for all. Props.

Another props goes out to councilman Mel Witherspoon, who made a marked effort to abide by the same rules council imposes on citizens to be heard. He also laid out specifics on what  he does personally, to avoid conflicts of interest on his own.