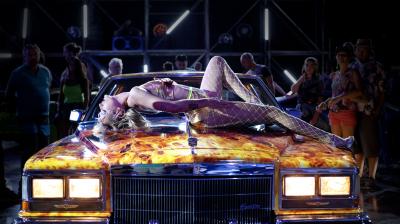 Julia Ducournau's debut feature Raw clearly owed a debt to the early films of David Cronenberg. Much like him, she displayed a clear fascination with the human body both in terms of sexuality and the myriad ways the body can be broken down and torn apart. Her new film Titane ups the ante on that thesis and then some with even more Cronenbergian body horror (somewhere between Crash and The Brood) but with a story that is decidedly her own. The film manages to be strange, sexy, surreal, oddly funny, and stomach-churning all at once. And now this gross little curiosity is coming to the Eerie Horror Fest.

At the center of the plot is Alexia (Agathe Rouselle), a dancer with an unusual obsession with cars following a childhood accident that left her with a titanium plate in her skull. She must flee the city after committing a series of unexplained murders and in the process enters the life of a fire captain (Vincent Lindon) who has just been reunited with his decade-long missing son. However, things get complicated when Alexia's old life and the new one she's trying to build collide in a gruesome and unexpected way.

I'm trying to keep the plot as vague as possible as part of the fun in this story is letting it take you in wonderfully weird directions. Ducournau is juggling with different themes at the same time related to family, gender identity, sex, and most importantly, the ever-changing relationship between the soft, malleable human body and the cold, unmoving forces of mechanization. These themes don't all mesh perfectly but most of the enjoyment lies in just witnessing it all unfold. — Forest Taylor