The Folkadelics head to Sprague Farm & Brew Works for what they call "one of the best experiences ever."

by Matt Flowers
View ProfileFacebookTwitterGoogle+RSS Feed
June 29, 2013 at 10:48 AM 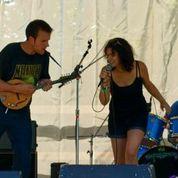 Beneath summer's hot sun, gardens of music festivals begin to sprout, showcasing their lineups like a farmer and his most prosperous crop. If you're one who enjoys chowing down on some rich musical produce, you can pick and choose, or gorge yourself this summer. Around the Erie area, we have the Crawford County Music Festival Saturday, June 29 at Sprague Farm and Brew Works, Blue Heron starting July 5 in Sherman, N.Y., and the Chaffee's Gathering beginning July 26.

Newest to the bunch is WQLN's Crawford County Music Festival. While it's only in its third year, those tending to this gathered crop of talented musicians already have some strong roots planted, and their lineup this year includes Nancy Deckant, Tom Stine, the Tiger Maple String Band, The Folkadelics, and headliners Reverend Peyton's Big Damn Band.

Veterans of the festival, The Folkadelics are chomping at the bit to get back, as band co-founder Gavin Cummings describes the fest as, "one of the best experiences ever."

This is saying a lot coming from a guy who has had the privilege to open for a smorgasbord of bands, including The Wailers, Rusted Root, Badfish, and more.

In 2006, Gavin and other co-founder Sam Miller planted the seeds for the band, originally naming the project Sampson and The Folkadelics. They covered folk songs with two acoustic guitars and an occasional keyboard. After gaining experience gigging around Ithaca College, Sam started harvesting a small collection of original music.

"I put my faith in Sam's song writing," Gavin confirms. "It's a bottomless pit – he just keeps churning them out."

As Sam continued writing, the music flowered into a reggae-tone, electrified-folk sound. Initially Gavin was unsure of this progression. "I was always of the thought, 'Don't play original music unless it's really f------ good.'"

But as Sam brought forth riff upon riff and line after line, Gavin began to see Sam's vision. "He just started playing a riff and singing over it, and I was like, 'Damn, that's actually pretty awesome.'"

Since the band's conception, they've added a handful of members, which has made their sound bigger and even more eclectic, including female vocalist Danny Faraone, which puts a little Stefani twist into the mix of "Sublimy" influenced tunes. (For those familiar with the song "Saw Red," this is a wonderful combination of sounds)

Lucky for you, the Crawford County Musical Festival is bringing them in for a second round where you can see and hear The Folkadelics perform along with a stellar line of up locals and out-of-towners. If you want to get taste before you head out to Crawford County, you can give them a listen at TheFolkadelics.com.