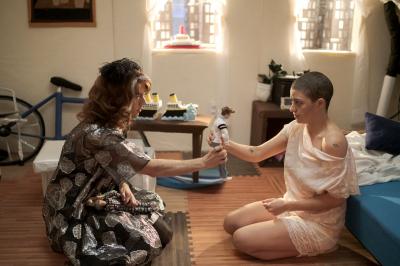 Followers of  Search Party know they're always in store for something different. Essentially from its very first episode, it has tossed enough twists and turns to keep the audience's head spinning. If you haven't been able to check out  Search Party yet, do it. It's a fantastic show that's severely addicting, able to be binge-watched in a manner of days. The show follows a quartet of New York City twenty-somethings as they begin to unravel the disappearance of one of their acquaintances from NYU. It stars Alia Shawkat (best-known as Maeby Fünke on  Arrested Development) as Dory Sief, John Reynolds (Save Yourselves!) as Dory's boyfriend Drew, and John Early and Meredith Hagner as her friends Elliott and Portia. If you'd rather see how this roller-coaster story unfolds yourself, beware of spoilers ahead.

This season almost entirely revolves around Dory's abduction by Chip (known to the group as "the twink"). The spoiled and troubling big bad of this season (played by Cole Escola) proceeds to hold Dory prisoner and subjects her to untold amounts of psychological trauma and ultimately succeeds in brainwashing her. As we see Dory's transition from unwilling prisoner to terrified friend, Shawkat gives a brilliant and moving performance, her pain and self-reflection at the forefront of the viewer's mind.

If you disregarded the spoiler alert and wonder how Dory got from searching for a missing person to being one, then watch the show.

Perhaps the biggest shift in this season is that it's simply not as funny. Of course, the content of the plot makes that nearly impossible, but threading that needle has long been one of the hallmarks of a successful dark comedy.

And oh, what a wonderful dark comedy it was! Season Three was an unmitigated masterpiece, reveling in such a high degree of absurdity while somehow keeping the show more character-based than ever. Still, the show's ability to reinvent itself is worthy of note. But even if Season Four was bad (which it isn't, for the most part), the cliffhangers that cap each 22-minute episode will have you keep going, eager for a fifth season. — Nick Warren

by Nick Warren10 hours ago
No local deaths reported by Erie County Dept. of Health