Next Thing is a well-thought-out record, and one of the finest examples of a new, emerging generation of songwriters. 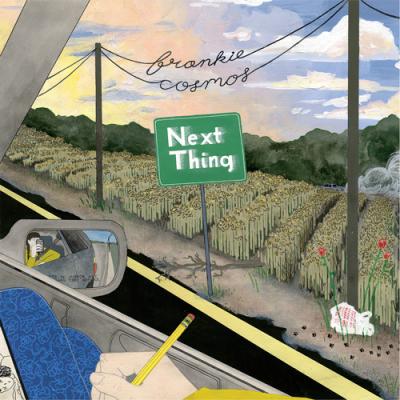 When you first hear Next Thing, you'll be struck by how gentle it is. It's immediately personal. Imagine going on a walk with someone who abandons small talk and forges an honest connection, despite failing to maintain eye contact. You'll be pleased to get to know Frankie Cosmos. Her real name is Greta Kline (you might know her father, Kevin, or her mother, Pheobe Cates). You can call the band Frankie Cosmos, too. The New York City three-piece includes Kline's boyfriend Aaron Maine on drums, known for his project, Porches. Gabrielle Smith is also on the roster. She has a band called Eskimeaux, who put out one of the best albums of 2015, and who provide a perfect tonal counterpart to Frankie Cosmos. Still, to call them a "super group" would be antithetical to their understated sound. The tone is soft, sung with loud, wobbly whispers. Guitars are unadorned by effects or overdrive. Next Thing feels like the perfect bedroom album, an honest and intimate offering. It's a well-thought-out record, and one of the finest examples of a new, emerging generation of songwriters. – Nick Warren