A Q&A with the local songwriter in the about his newest album, My Gasoline Heart 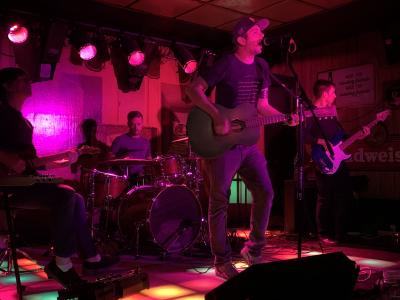 Jesse ZImmer
Fred Oakman and The Flood take the stage during a recent gig at the King's Rook Club. Oakman, a veteran of the local punk scene, will release *My Gasoline Heart on Oct. 25 u2014 the first album under his name.

Fred Oakman has been making some of the region's best original music for decades now. From his work in The Twirpentines and Signal Home to his current project One If By Land, he's made a name for himself in the punk scene. In more recent years, however, the Meadville-based songwriter has been playing solo or accompanied by his band as Fred Oakman and The Flood (with Troy Messerall, Nate Kuhn, and Jacob Peters). The first album under his own name, My Gasoline Heart, is set to debut on Oct. 25. We sat down with him to catch up.

Fred Oakman: Initially I knew this project was going to be a pretty big undertaking, so in an attempt to not distract myself any more than necessary, I took the easy route. I decided to use the title of one of the tracks for the album. I'd rather not get too metaphorical about it and leave it up to interpretation.

NW: How did writing and recording this record differ from previous efforts?

FO: For those who don't know, I've been playing punk rock for a long time and this album is definitely not that. The writing process wasn't much different than how I approach the writing for One If By Land. All of the songs on this album have been written for quite some time now and they never really fit in with One If By Land's catalog of music.

[With] the backlog of songs accumulated, I started performing solo sets around the area with pretty much every song I had written that never found a home with punk rock.

The interesting thing that I was cornered into doing this time around was to kind of be more of a leader than ever before. The songs were already complete before I brought The Flood into the picture to perform and record with me. It's incredible how a song can stay the same yet still get a new lease on life by adding more instrumentation. One of the most difficult turns to navigate in all of this was to ensure that these songs could still be performed solo and not sound different than how they would sound alongside The Flood.

Recording was a blast. I built a home studio recently and it was nice to put it to use. It's a blessing for sure, but also it can be a huge hangup. You need to learn when to stop pressing record [laughs]. I think we did a great job with that on this release.

by Nick Warren10/23/2019, 11:15 AM
An album just begging for a singalong, My Gasoline Heart offers a steady burn that stays with you

NW: Did any other artists directly influence how you went about this?

FO: I've found pockets of inspiration from other singer-songwriters for sure. Guys like John Moreland and Jason Isbell have been on heavy rotation for the last few years. Whether it's an accurate perception of the music industry or not, I've been feeling that the art of making a solid record from start to finish is slowly being lost on us as artists. The music industry is putting more emphasis on singles and EPs these days. While that's completely fine if that's your thing, I've always been smitten by artists who can put down 10 tracks on an album in such a manner that it almost has a life of its own, ebbing and flowing from one song to the next.

NW: What made you decide to bill this as a solo record as opposed to a Fred Oakman and the Flood record?

FO: Of course you'd ask this [laughs]! I deliberated for a month or two on how to title it. I even called a meeting with The Flood to put the feelers out … If I'm bringing The Flood it'll say it on the flyer; otherwise, it's just me.

It's touchy in one regard but yet in another, it's not at all. I was worried The Flood were going to peg me for some kind of megalomaniac or ungrateful band dictator. I'm not sure why I was so apprehensive because I've known these guys for so long I should have known better than to stress about it. When I brought them in I did everything possible to inform them that this was a pet project of mine.

I mentioned before that these songs were all written before bringing The Flood into the fold and at that time I had been billed so many times as Fred Oakman. I already have one EP titled The God Fearing Boy, a single, a split with Fleets, and a four-song demo all released under my name Fred Oakman. I didn't want to muddy things up with the naming conventions. "The Flood" certainly gets credit in the liner notes and I'd never want to take anything away from their musicality with the songs we're performing.

NW: It seems like a bold choice or a mission statement to start an album out with a slower number like "That Ain't the Way," as opposed to a more traditional, anthemic opener like "Something New" or "You Make Me Sick." Were there any intentions there?

FO: Definitely. I've always preferred the slow, sad, lyrical side of songwriting. I've learned that sometimes when people get loud, an interesting approach is to get quieter. I really wanted to set the album off with a song that commanded a semblance of attention. I've poured so much into these songs and the lyrics that I really want people to listen to this record and sit down with it. Maybe it is really bold, but most likely probably just a bad decision [laughs]?

Going back to what I mentioned earlier, the pacing of a record is so important to me. For this album, one of the most difficult decisions I had to make was choosing the order of the songs and the actual songs that would appear on the record. It caused a lot of sleepless nights.

Fred Oakman and The Flood will be performing My Gasoline Heart in its entirety at The Firehouse Tap & Grille in Meadville on Friday, Oct. 25 with supporting acts This American Song and Sunday at the Station.

9 p.m. to midnight// 875 Park Ave, Meadville, PA 16335 // Free // For more information, go to fredoakman.com or listen to My Gasoline Heart at fredoakman.bandcamp.com